The inline version of the call to action box.

For some time now we’ve had two different email newsletter sign up forms here on Baymard. The hypothesis was: The traditional “sidebar sign up form” have no space for explaining benefits + It doesn’t capture readers as well because it’s not placed right after the user has finished reading an article.

So we’ve also had an inline call-to-action box for newsletter sign up, placed right at the end of each article: 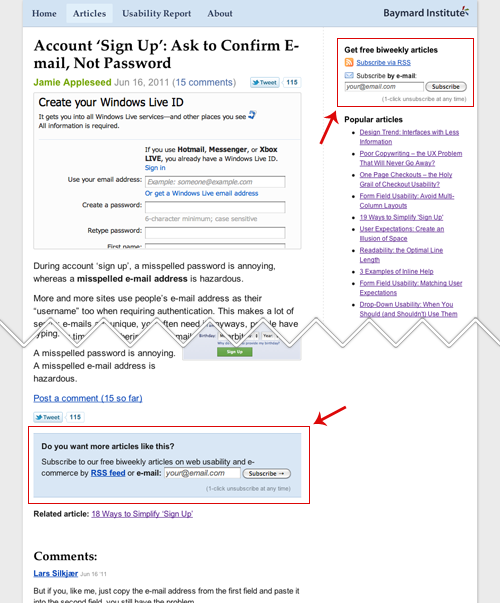 Only 35% used the inline form.

Our assumption was that the premium placement and the possibility to write some explaining copy would make the inline sign up form generate most of the new email subscribers.

Over the last year the sign up distribution has been 35% for the inline form and 65% have used the sidebar form. This was surprising because there isn’t any real copy in conjunction to the sidebar sign up form, and it requires the reader to scroll to the top - so “feature wise” the inline should have the upper hand. The sidebar sign up however have the benefit of having the same placement on most blogs throughout the last decade. Most web savvy users will instinctively look for it there.

This distribution, once more, tells us just how much a user’s assumptions and expectations from other sites will impact how your site is used. So while you can radically rethinking site structure, web conventions still rule.

Join 22,000+ readers and get Baymard’s research articles by RSS feed or

How Should Your Mobile and Desktop Sites Differ?

If my experience is any indicator, then the reason for the higher sign-up on the top is because I was looking for it.

I did not read an article before I signed up. I spent a few minutes reading about a report and concluded that I will get some good information from this site.

I then clicked on Articles, looked at the upper right side where I expected to find a RSS icon (which I did) and signed up.

Good usage scenario you describe. This could certainly be one of the reasons so many use the sidebar sign-up as opposed to the inline option.