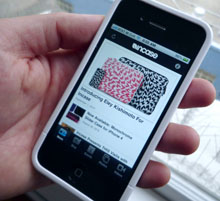 Incase’s iPhone app. This particular screen might as well have been a mobile-optimized web app. (Photo by Incase)

Apps for iPad/iPhone, Android, BlackBerry, Nokia, Windows Phone, Palm, etc… it’s really amazing to see so many designers and developers working to create great experiences on mobile devices. And perhaps even more exciting is that customer are OK with paying for these native apps, which opens up so many new opportunities. But there’s one thing I’m just as excited about, and that’s web apps.

A web app works on all these amazing new mobile devices, it’s accessible, it’s searchable, and it’s easy and cheap to maintain. You only need to develop and maintain a single version, and since you most likely already have a web interface for you web app, you really only need to create and maintain a new front-end for your web app, optimized for smaller screens.

That’s the thing with native apps. They require that you create and maintain multiple versions of the same app (one for each platform you wish to support) unless you can decide to support only one platform, but that’s sort of like having a website that can only be used in Firefox. But native apps do of course have some advantages, in particular these two:

If you wish to charge for your app or want your users to be able to do rich content creation, then you need to do native apps.

However, creating and maintaining so many different versions of the same app, you often see the attention to detail drop. Bugs creep in under the surface and development come to a halt because it’s simply too expensive and too time-consuming to innovate.

Web apps don’t suffer from these issues. The browsers on all the major mobile devices are of very high quality and they are all incredibly stable (they don’t crash). Because innovation is cheap, web apps don’t have the same tendency to go stale and the attention to detail is often maintained because faster development gives you time to test out more concepts and polish features.

In some cases, adding a mobile interface is a matter of adding an extra CSS file and updating a few graphics. In other cases, it will require rewrites of the actual HTML documents, but your actual application logic is still shared with the regular web version. This means web app generally require less attention. Because it shares codebase with your regular app/website, you often don’t need to do anything when new features are implemented – they’re supported by default.

So if the primary goal of your app is to provide content to the end-user, and perhaps allow the user to do some simple content creation (mainly text), then web apps are a viable alternative.

If you want to charge for your app or you want to do rich content creation, then native apps seems like the better choice (in some cases, your only choice).

If the primary purposes of your app is consuming content and simple content creation, then web apps seems like a better alternative than doing numerous native app implementations.

What are your thoughts on native apps vs web apps? 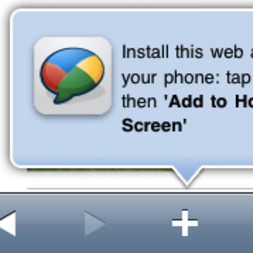 How Google Keep their iPhone Visitors Coming Back 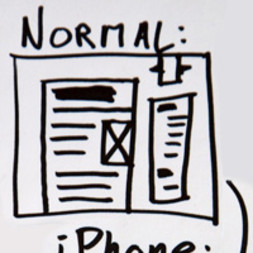 A lot of newspapers and magazines are heading down the native app route when they have a ready made, cheap, accessible technology ideal for distributing content (namely HTML).

I guess there are two reasons: the iPad is ‘cool’ and they can charge for apps.

I wonder how long they’ll last, though. I don’t own an iPad (or iPhone, even) but I hear the fact you can’t copy and paste and hyperlink within these apps makes them a pain to use after the initial ‘isn’t this pretty’ feeling fades. HTML just works.

They also narrow your market. A well constructed site will work across virtually any device and therefore can reach many more people.

For example, I’ve started reading The Guardian again on the commute into work because I can access it on my Nokia N78.

Your right. In big organizations it’s often important internally to be able to say we’re “follow the cool emerging trend” and making an app for iPhone and iPad certainly qualify, regardless if it actually makes more sense to make a not-so-cool scalable version of your website (that works across all devices and are cheaper to code).

To some point it might also be because there are more programmers out there being able to code native apps, whereas fewer have a lot of experience with responsive web-design (creating websites that scales across all devices). We will have an articles ready tomorrow on how to do responsive web-design.