Despite testing leading e-commerce sites, users encountered more than 1,400 usability issues when trying to update an expired credit card or a stored address, track an order, or initiate a return. All of these issues have been analyzed and distilled into 65 usability guidelines specific to Accounts & Self-Service.

The 65 guidelines cover most aspects of the Accounts & Self-Service experience, including the design and performance of the “Account” drop-down and dashboard; features and information related to orders, order tracking, and returns; and specific account features available on almost all e-commerce sites (e.g., payment method management). 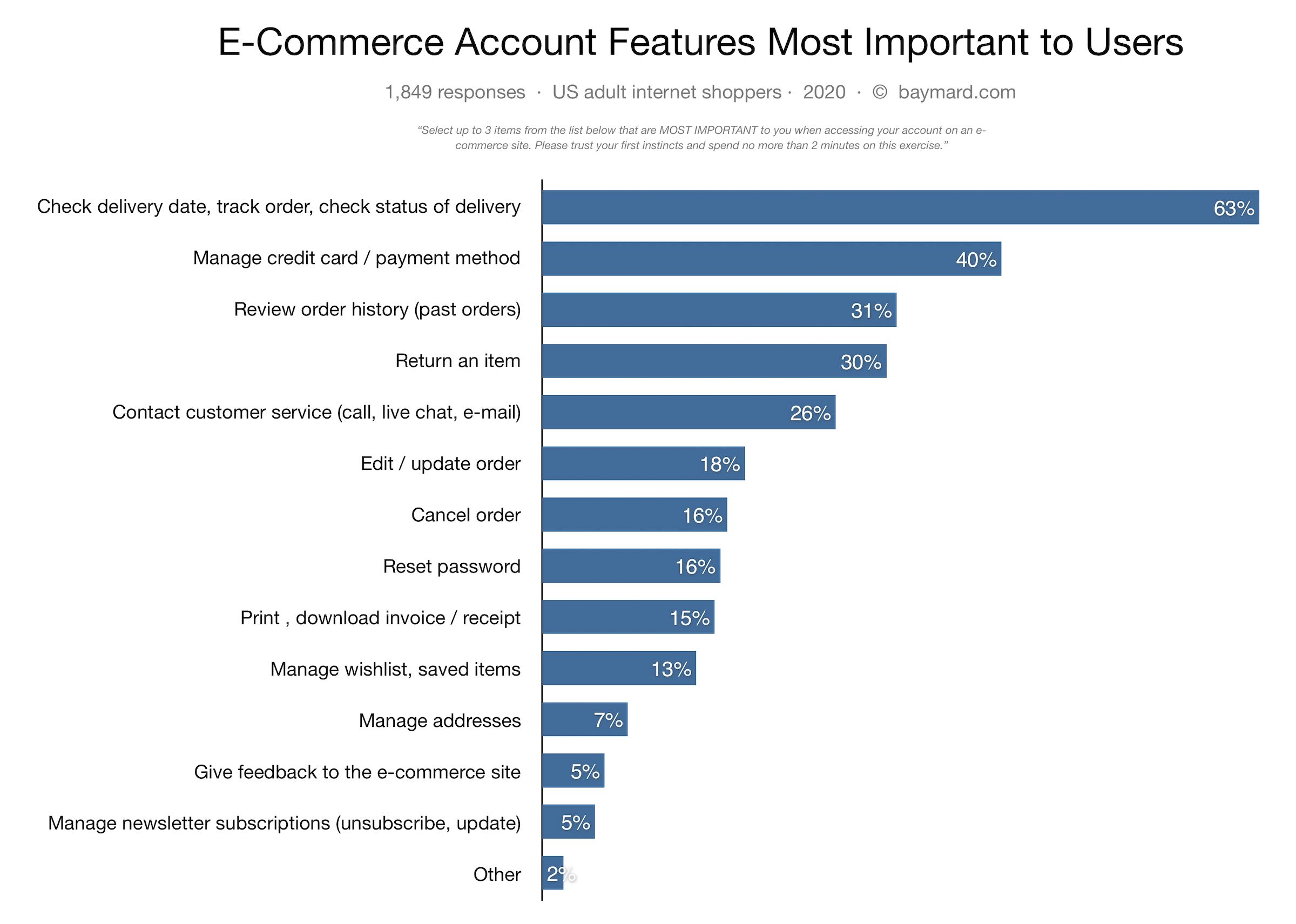 An aspect of Accounts & Self-Service covered heavily in this new study are the account features that are critical to users’ ability to manage their own accounts, in addition to the most widely accessed features. 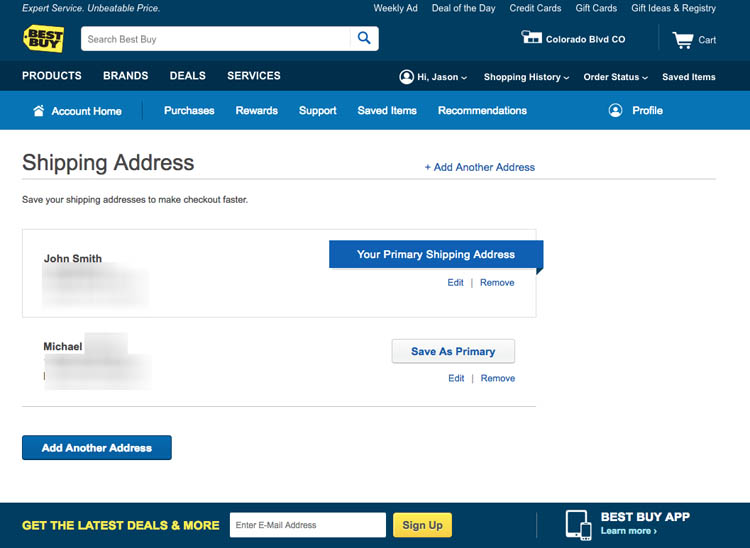 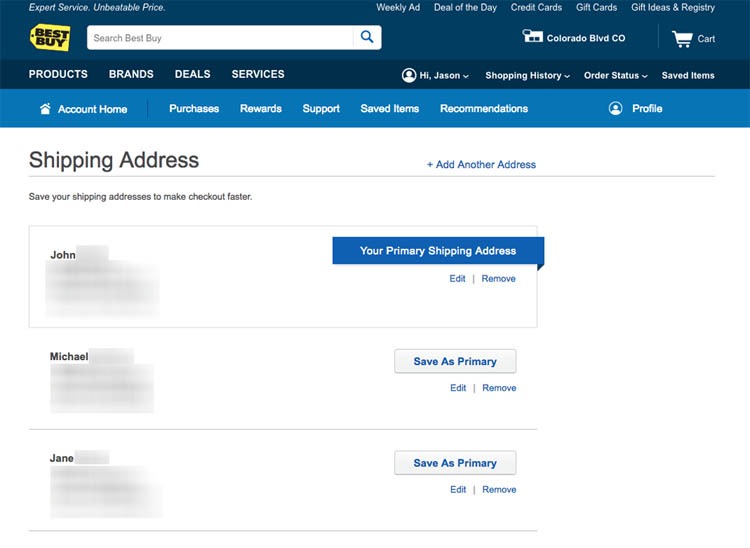 In Best Buy’s address management interface, the ‘Add Another Address’ option is initially clearly in view (first image), but eventually gets pushed down below the viewport when more addresses are added (second image). The visual emphasis of ‘Add Address’ changes significantly based solely on the number of stored addresses.

Address management: While users may not access their accounts very often to manage their addresses, address management is a crucial feature that must work well for users to be able to place and manage orders. For example, during testing it was observed that some sites nudge users to either edit or add an address, rather than present the options equally in the interface. As a result, users who are nudged to, for instance, “Add” rather than “Edit” an address tend to accumulate outdated addresses, increasing the chance that the user will select the wrong address during checkout. 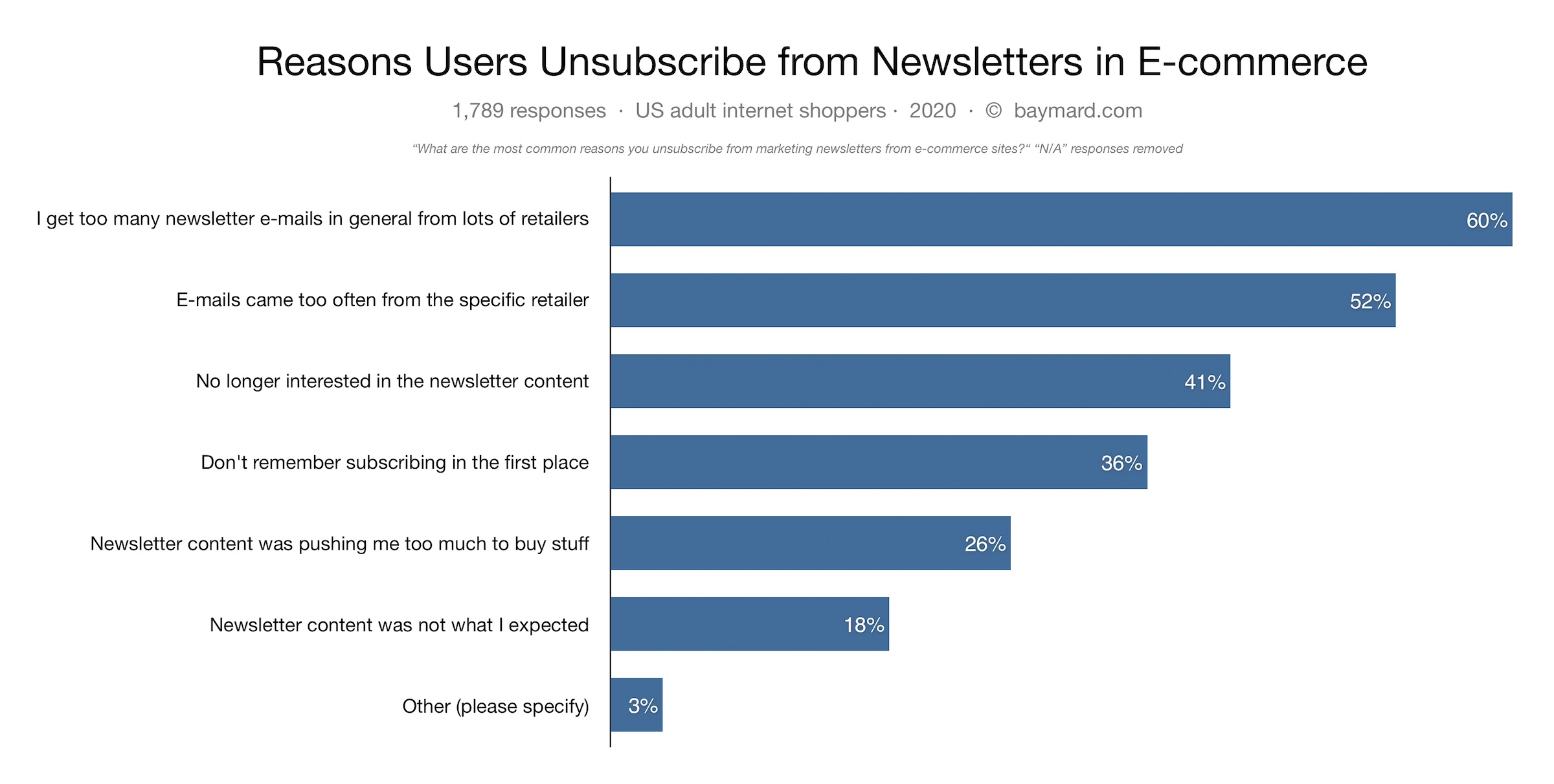 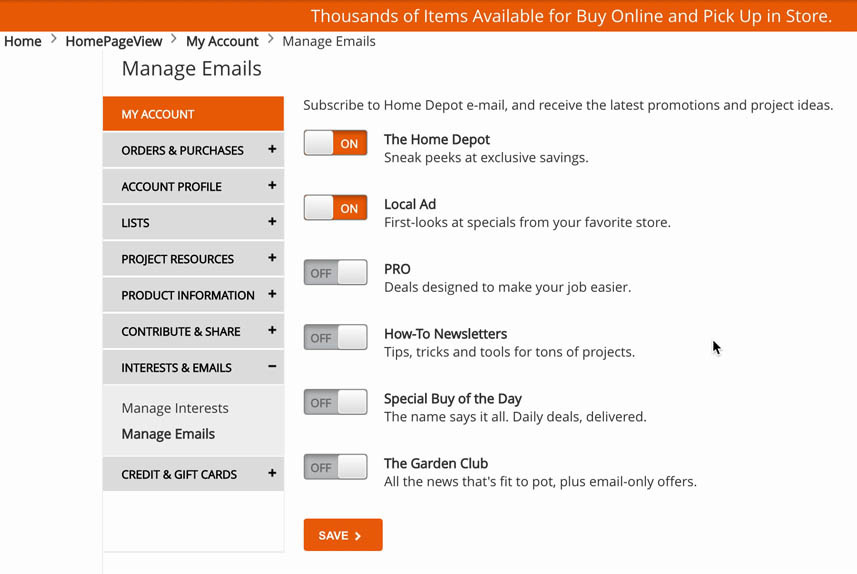 “‘First-looks at specials from your favourite store.’” I’d want that but where does it say the frequency of it? Because sometimes they could have specials every day”. Some test subjects noted the lack of options to adjust the frequency of emails on Home Depot, causing them to hesitate when deciding whether to sign up for newsletters they’d be interested in receiving.

Newsletter communication: Newsletters are the main way most sites communicate with users on a regular basis, and often serve as the only point of contact between sites and users over an extended period of time. But testing revealed that many sites have very poor newsletter management features, making it less likely that users will want to engage with a site through this ubiquitous form of communication. To take one example from our quantitative study, the second-highest reason why users unsubscribe from newsletters is because they get too many from a specific retailer. Yet testing revealed that many sites fail to allow users to adjust how frequently they receive newsletters — causing some to simply “Unsubscribe from All” to avoid having an overly cluttered email inbox. 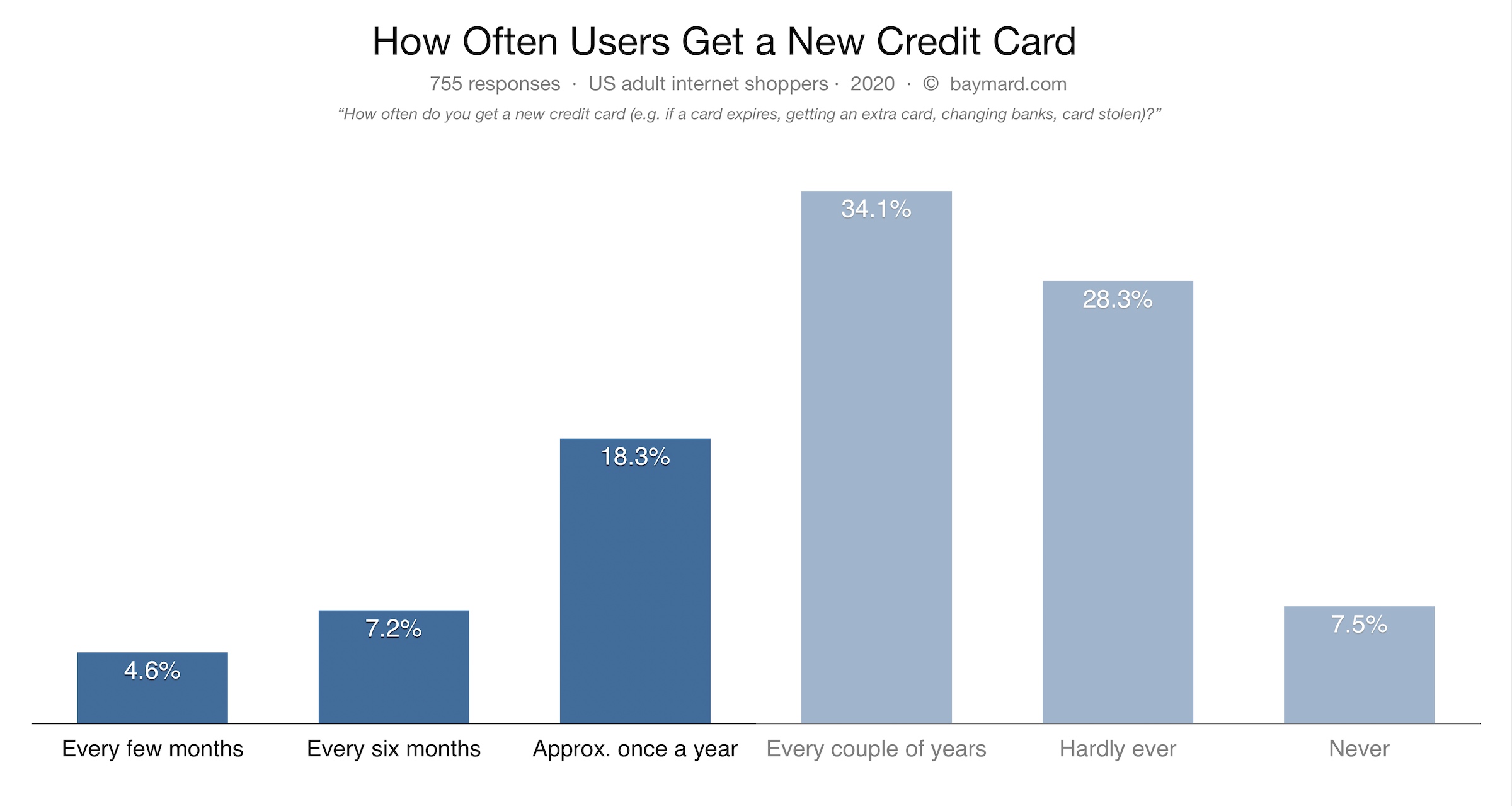 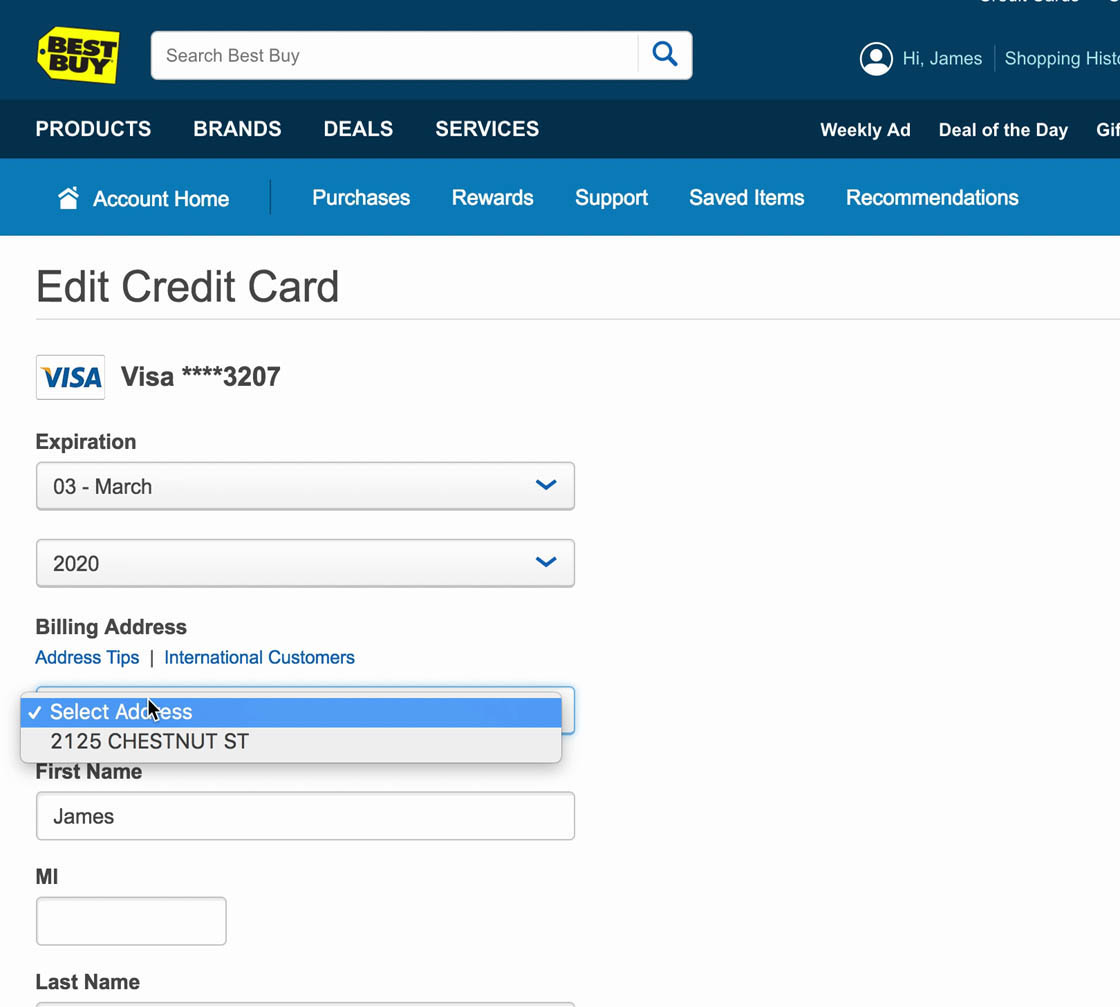 “Where is the number? Do I update it here? That doesn’t make sense”. When attempting to edit payment method details, many subjects struggled to understand that the interfaces would not allow them to edit their credit card number. 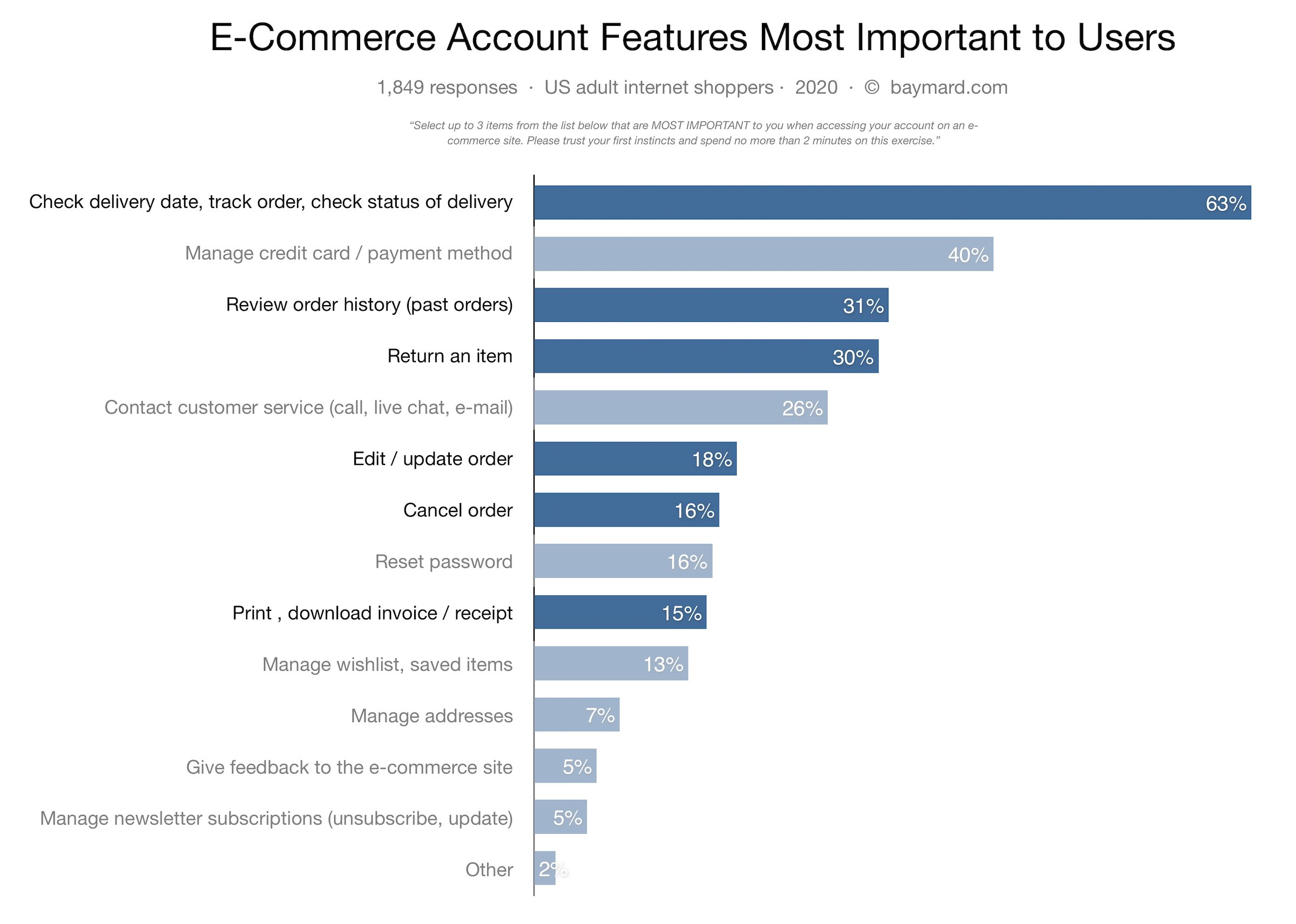 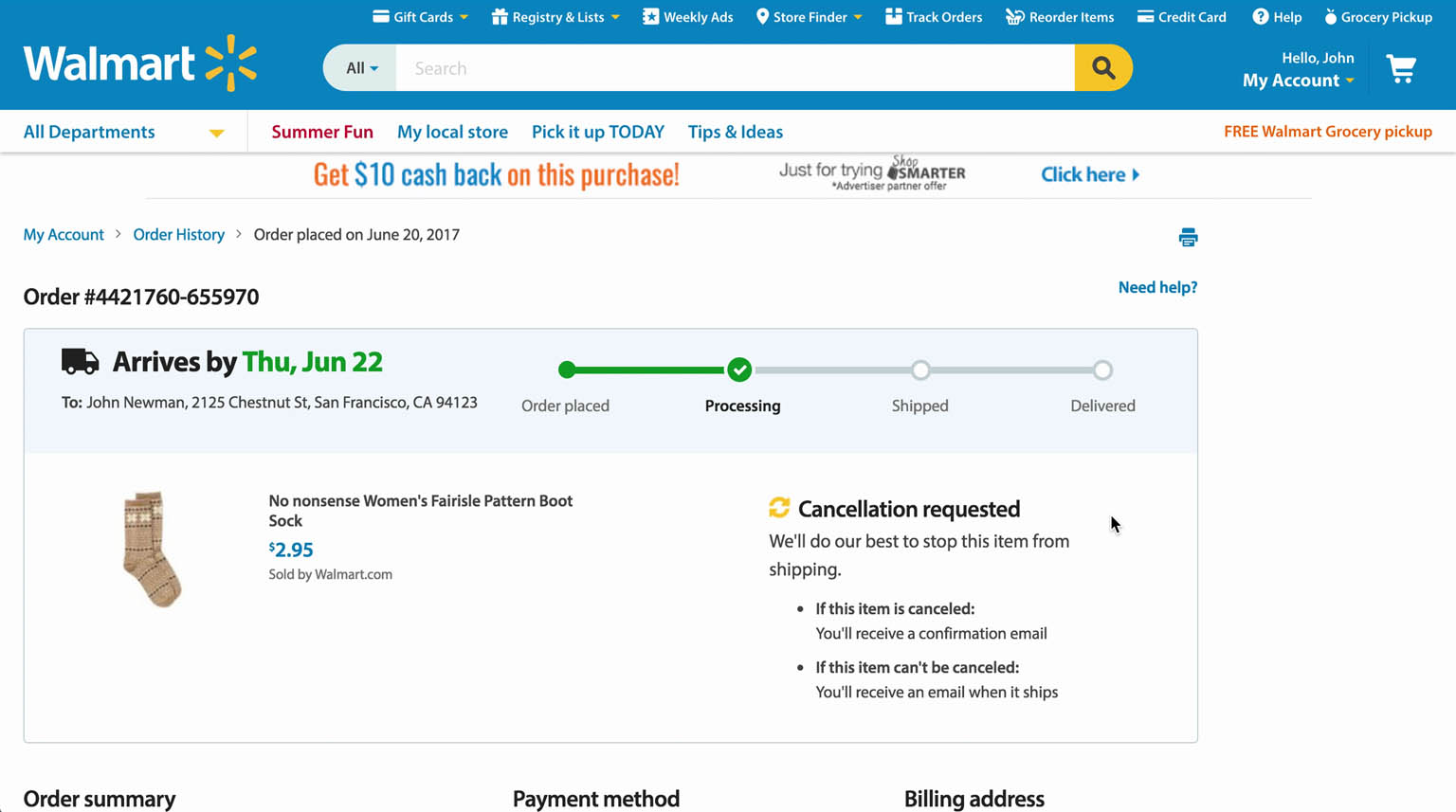 “Well, now it says ‘It cannot be canceled’… Then I’ll have to receive it and send it back — that’s annoying”. Walmart’s order status page indicated that cancellation had been requested, but created ambiguity by displaying an order state of “Processing” and “Arrives by Thu, Jun 22.”

Order management: Our quantitative results show that most users interact with Accounts & Self-Service features when they’re getting information on or seeking to manage an order they placed. However, within this subarea testing revealed many UX pitfalls that many users are likely to encounter — such as missing order status states, hard to find order cancellation features, or incomplete or confusing order tracking information — which will place more strain on help and customer service as users grow frustrated with their options to solve issues on their own. 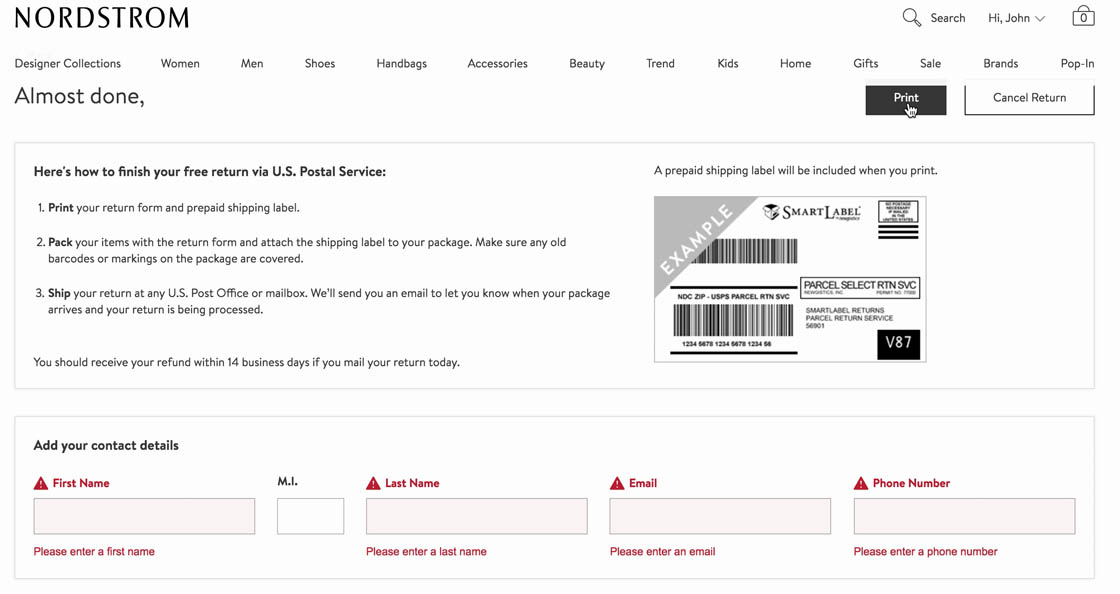 “Oh, that pisses me off. I shouldn’t have to enter my information. They should already have my details, because I’m logged in to the website! If they have all my information, I don’t know why I have to add that again”. 44% of test subjects who were signed in to an account tried to submit a blank form at Nordstrom’s return-shipping step as their information was not prefilled, negating what should be a benefit of being an account holder.

In all of our previous studies we’ve noted instances where users who are having issues become very upset, to the point where their frustration negatively affects how they view the site or brand. In this Self-Service study this issue was again observed, with perhaps even greater frequency.

This perhaps shouldn’t be too surprising, given that the Accounts & Self-Service area of e-commerce is arguably the most personal of the e-commerce areas that a user experiences.

Users tracking a package, attempting to cancel a wrong order, or attempting to return a product often interact with a site on a deeper level than users, for example, browsing product pages or filtering product lists. They have more “skin in the game” after having invested much time (and money) with a site — and therefore are particularly attuned to any friction encountered while trying to manage Accounts & Self-Service features. 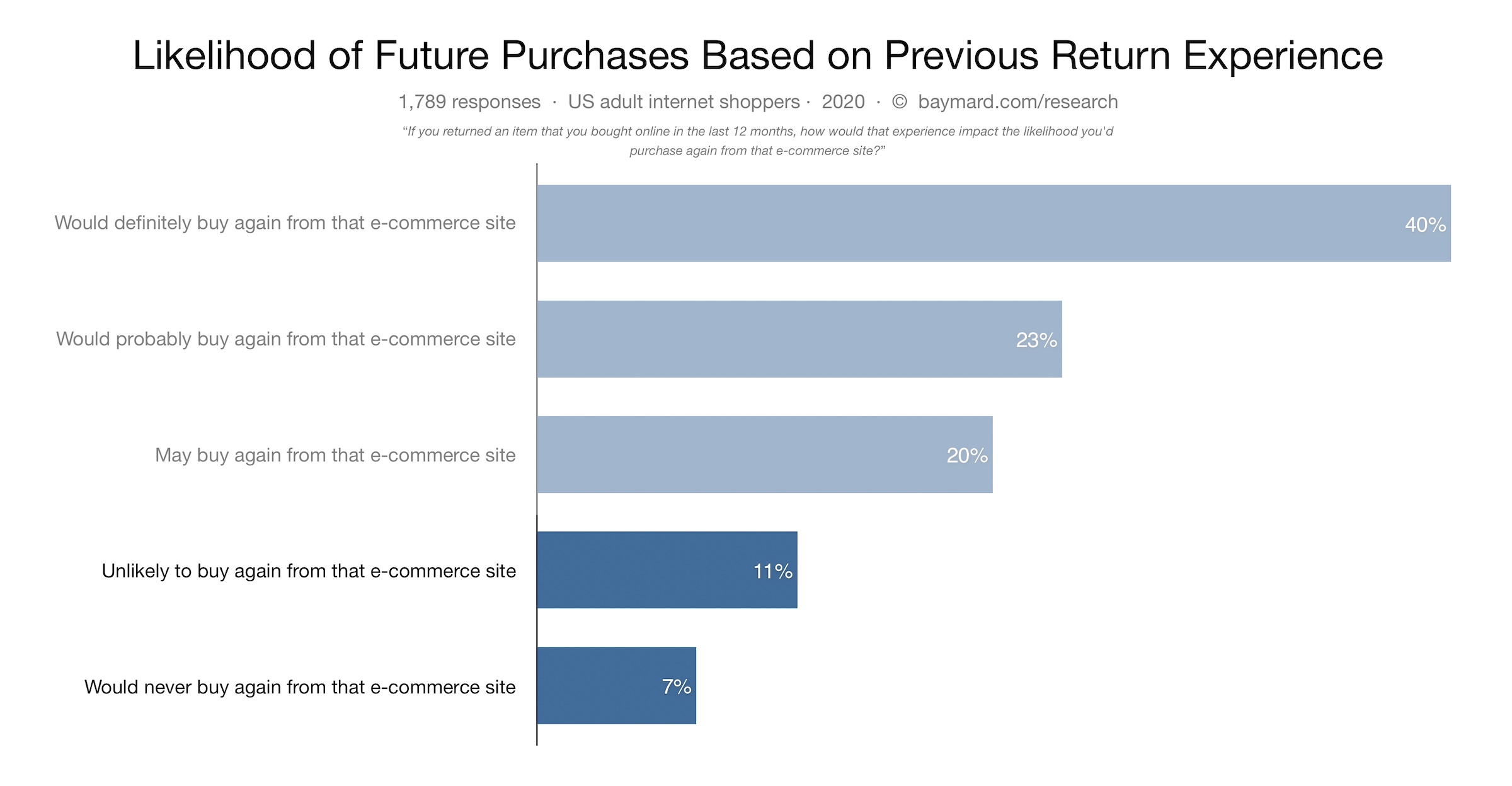 For example, our quantitative study of 1,789 US adults finds that 7% would never purchase from a particular e-commerce site again, while 11% would be unlikely to do so — solely due to a negative return experience.

The performance of the user account area of an e-commerce site can lead to repeat and long-lasting customers — or it can so sour a user on a site that they never return. 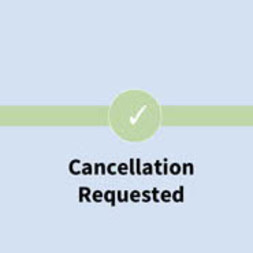 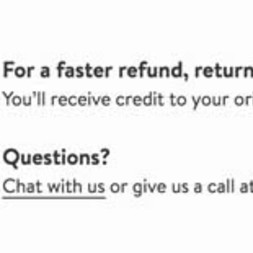 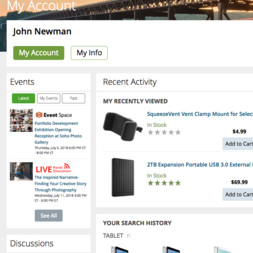 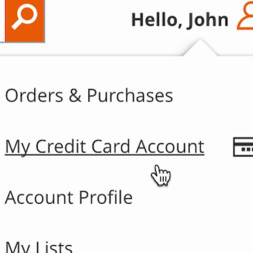 Self-Service UX: Distinguish Primary from Secondary Paths in the ‘My Account’ Drop-Down (71% Don’t)

No comments yet – write one!