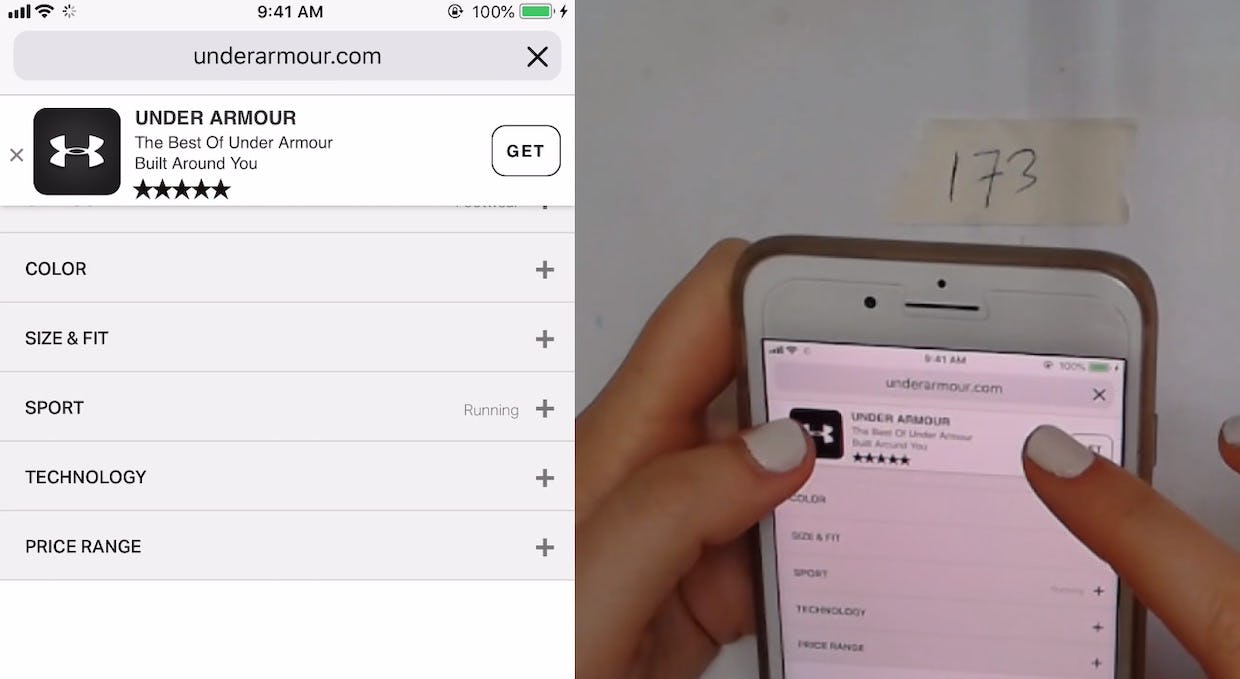 “Install App” ads — which ask mobile website users to install the site’s application on their mobile device — are quite common on mobile e-commerce sites, with 53% of sites during testing displaying one.

Indeed, it’s entirely understandable that e-commerce sites that have apps would want to promote them while users are on their website.

Yet our newest round of large-scale mobile e-commerce usability testing reveals severe and disruptive issues caused by these “Install App” ads. These include:

These issues make it clear that having an ad for “Install App” has a high cost in terms of causing an often severe negative impact on users’ product-browsing and -purchasing experience on the mobile website. During our testing “Install App” banners were the direct and sole cause of several abandonments of some of the world’s largest e-commerce websites.

In this article, we’ll discuss the test findings from our latest mobile usability study related to “Install App” ads. In particular, we’ll discuss:

It’s a bit of a disaster now, it’s not very straightforward. I can’t see where it says ‘Add to Cart’. A subject at Sephora, who had already decided that she wanted to add a lipstick to the cart, was unable to do so. She scrolled the product page multiple times, scanning for an “Add to Cart” button, then went to the cart and assumed she had to sign in to add the product to the cart. This was a stopping point for her, and only after the facilitator asked her to close the “Install App” ad did she see the “Add to Cart” button. Such a severe block to users’ ability to make a product-purchase decision will be a direct cause of site abandonments.

In testing, the most severe outcome of having the “Install App” ad displayed was when it covered critical site elements — for example, the “Add to Cart” button. As one user said, “‘Add to Basket’ was underneath the little flash pop-up thing. Yeah, that’s stupid [laughs]. That annoyed me.”

With the “Install App” ad displayed, some users won’t be able to add products to their cart without first dismissing the ad — which testing revealed not all users will think to do. Consequently, in some cases the “Install App” ad will be a direct cause of abandonments. 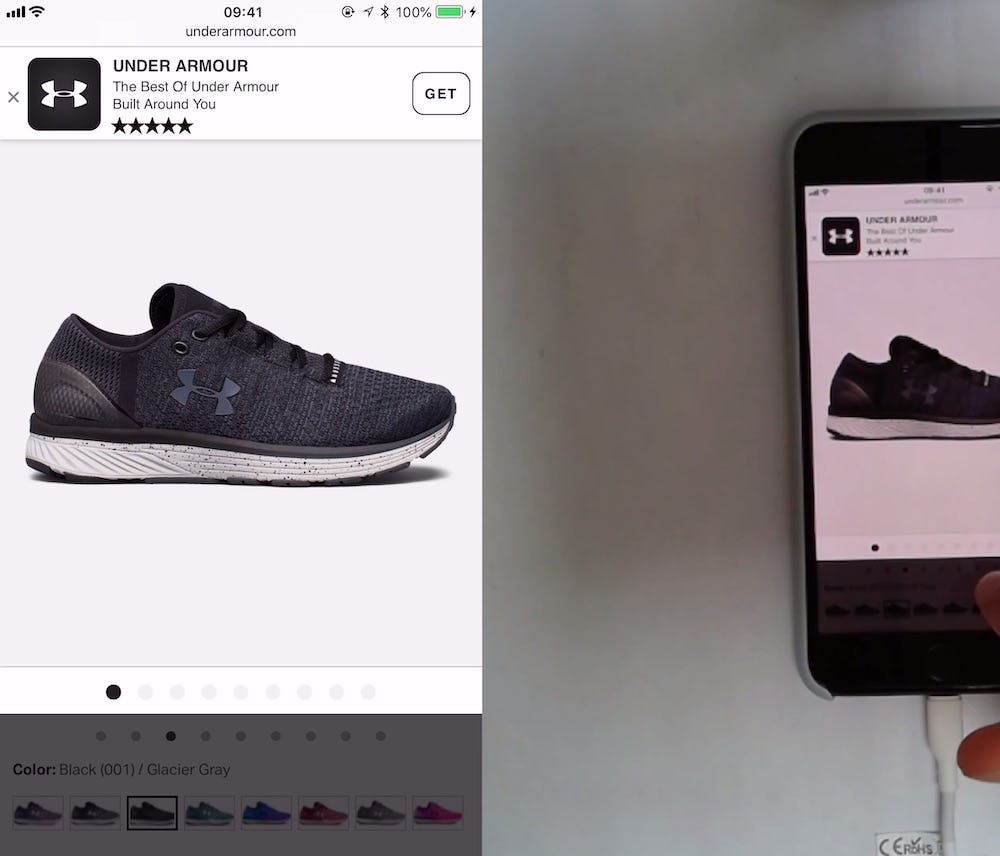 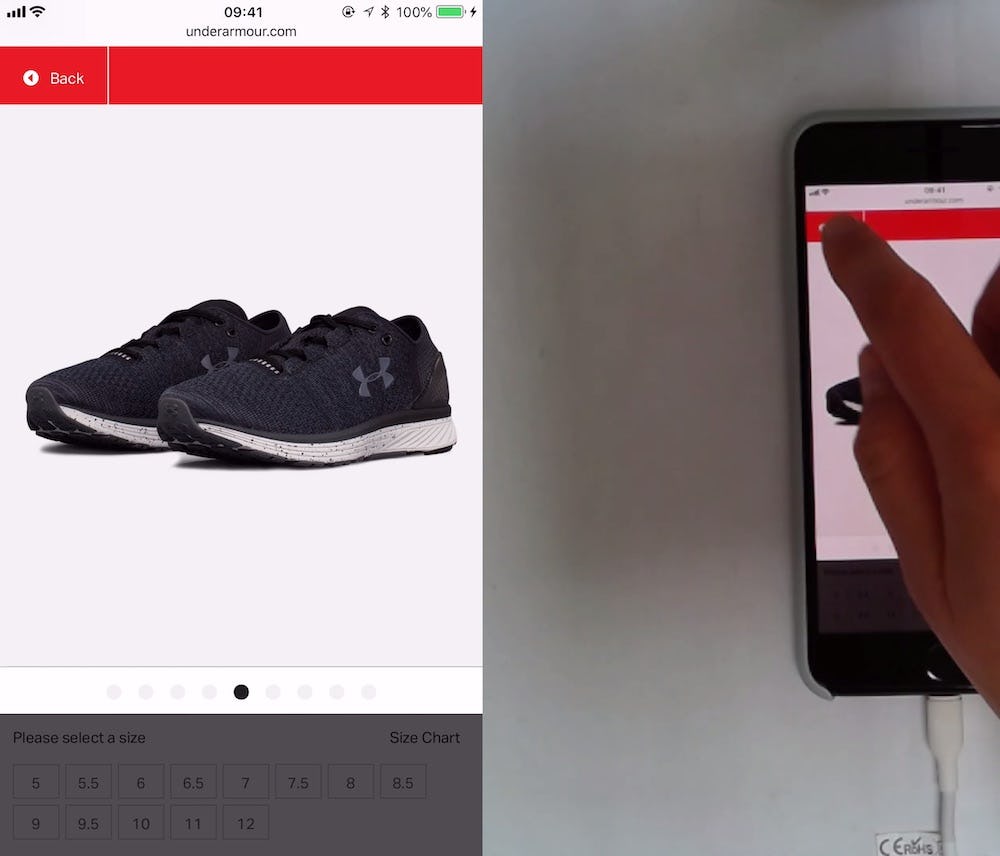 “I don’t know how to get out of this…Oh there”. A user at Under Armour was viewing images of shoes in an image gallery overlay. When she was finished she wanted to return to the product page but couldn’t figure out how to exit the overlay. She first tried tapping the page behind the overlay but nothing happened (first image). Stumped, she wasn’t sure what to do, before she finally noticed and closed the “Install App” ad, which revealed a “Back” link to exit the overlay (second image). 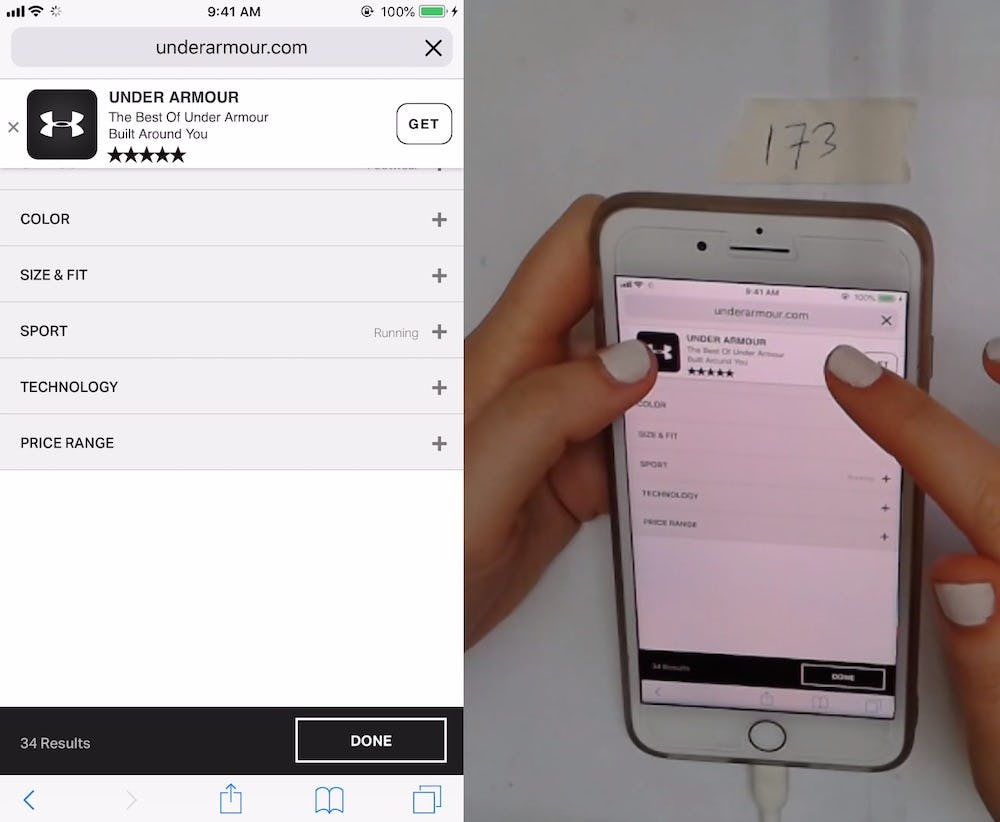 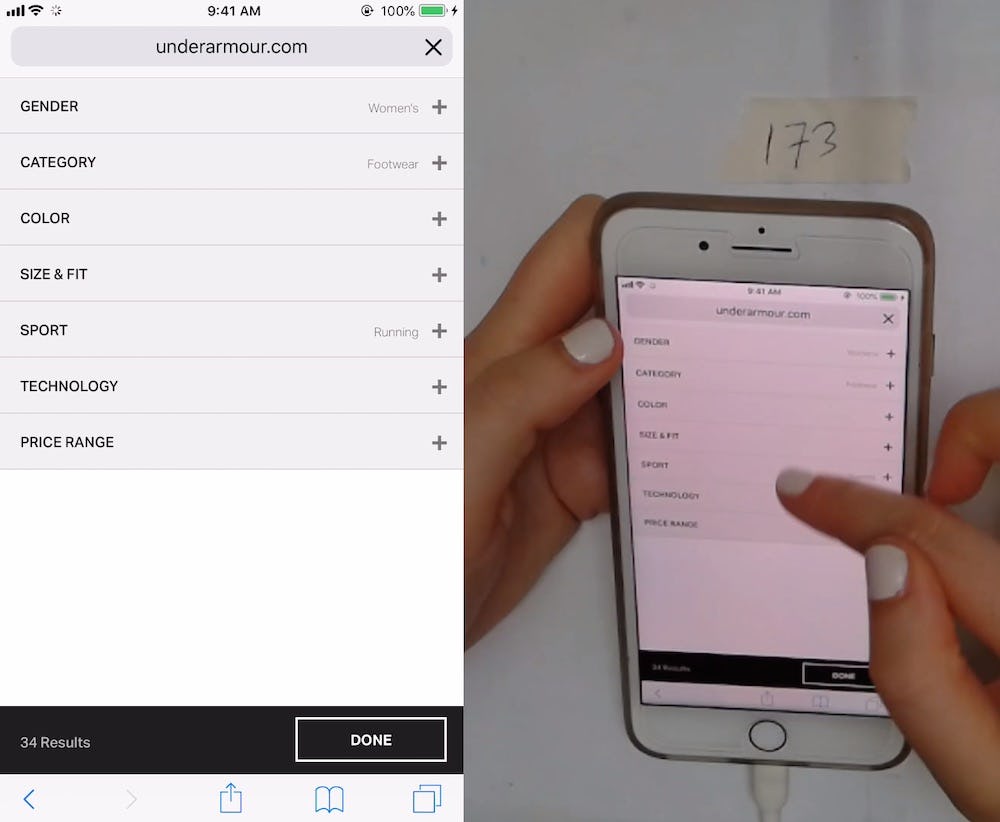 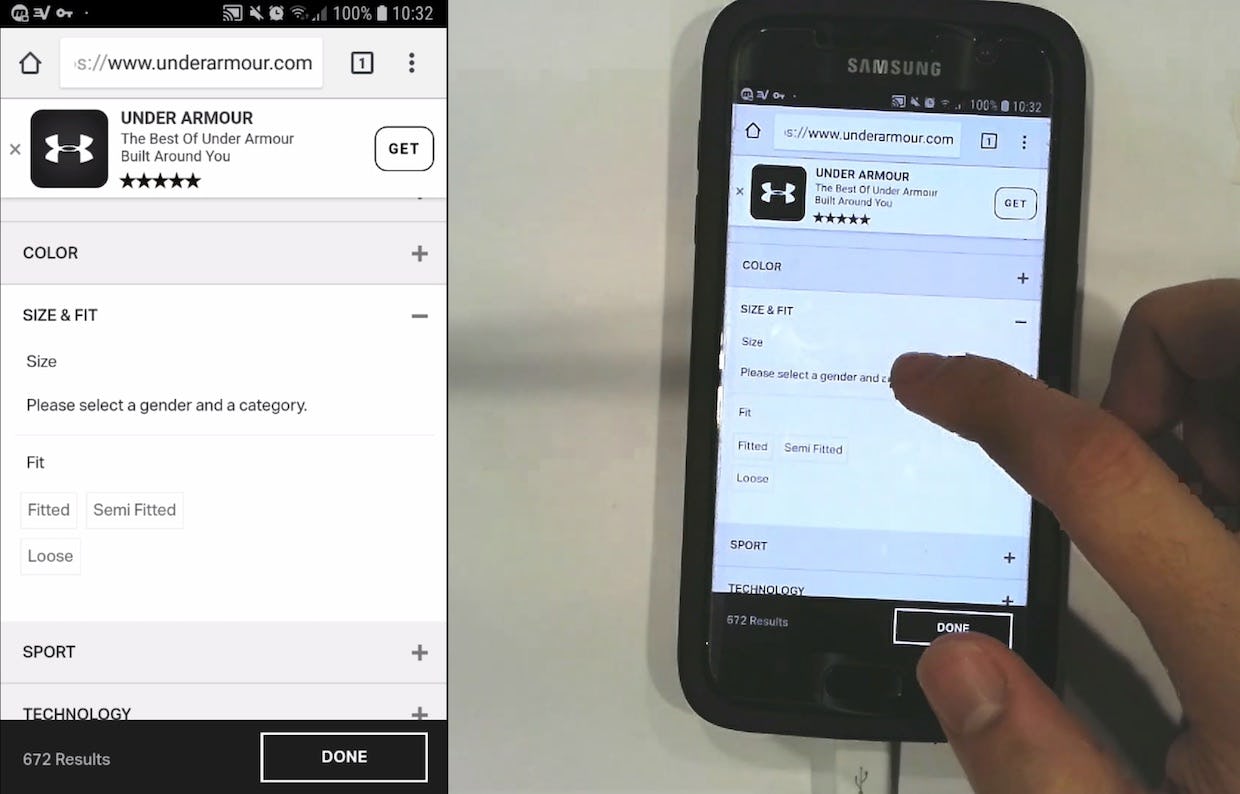 “Is there a way I can find it for “Men” and not “Youth”? None of them are clickable. It doesn’t seem like I’ve got size options. There should be something underneath “Size” that I can click…I don’t know what to do.” A different user at Under Armour never thinks to dismiss the “Install App” ad — consequently, he never discovers the filters for “Gender” and “Category”, which were required selections in order to see “Size” filters. He ended up with an overly broad product list that was difficult to navigate. 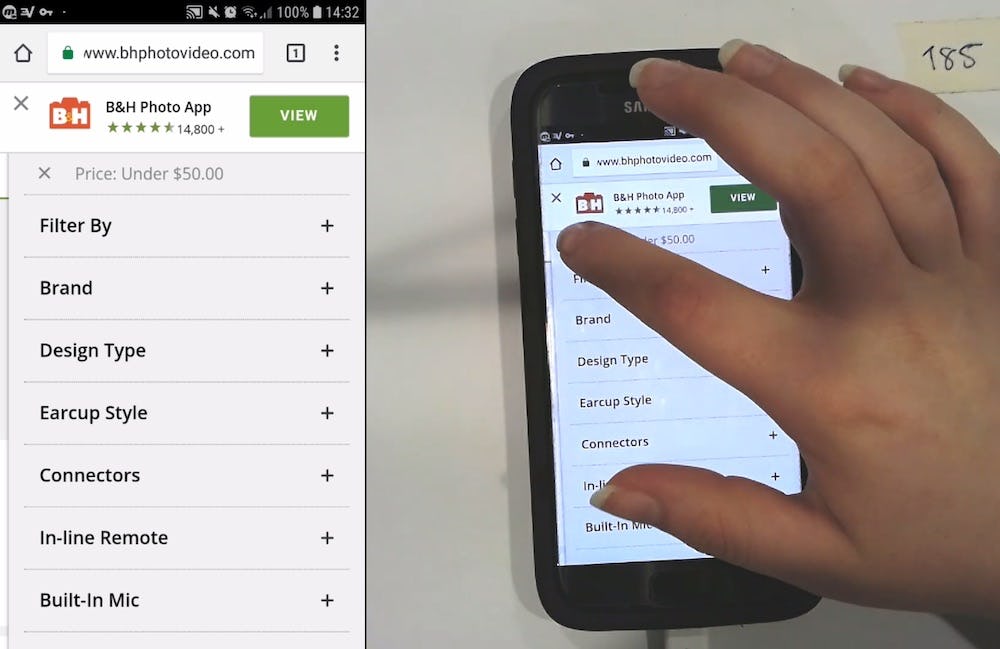 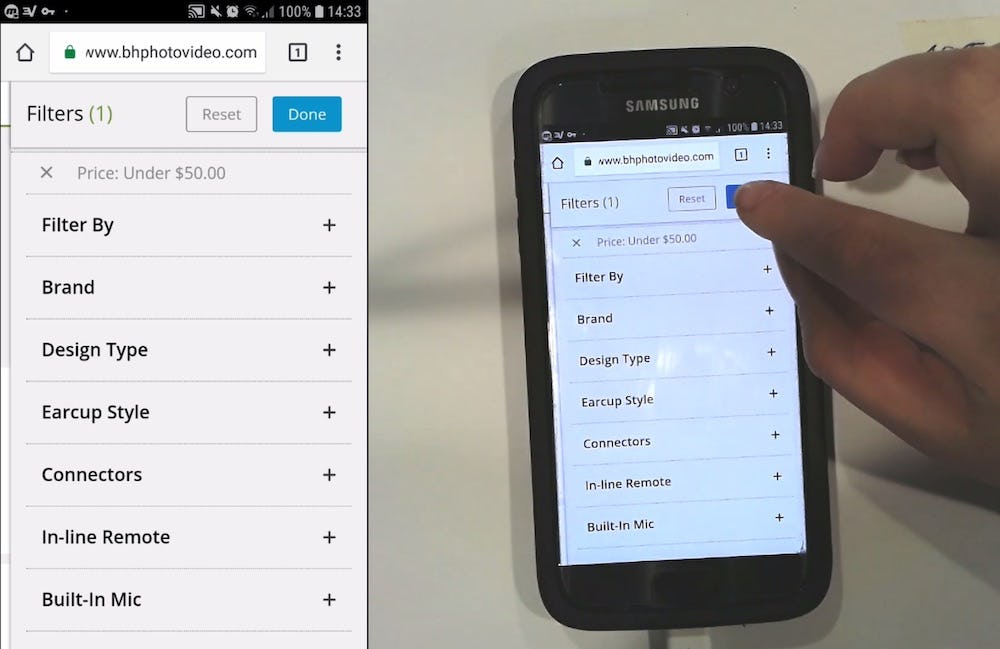 These instances, while less severe than when the “Install App” ad covers the “Add to Cart” button, are also quite disruptive for users, as they begin to feel lost and no longer in control of the interface.

Furthermore, some users will never think to dismiss the ad and, consequently, will never find whatever the ad is covering (e.g., crucial filter types). Other users may go back-and-forth between different interfaces as they try to figure out why their selections aren’t being applied (e.g., when the “Install App” ad is covering the “Done” button in filtering interfaces), before finally thinking to dismiss the ad. 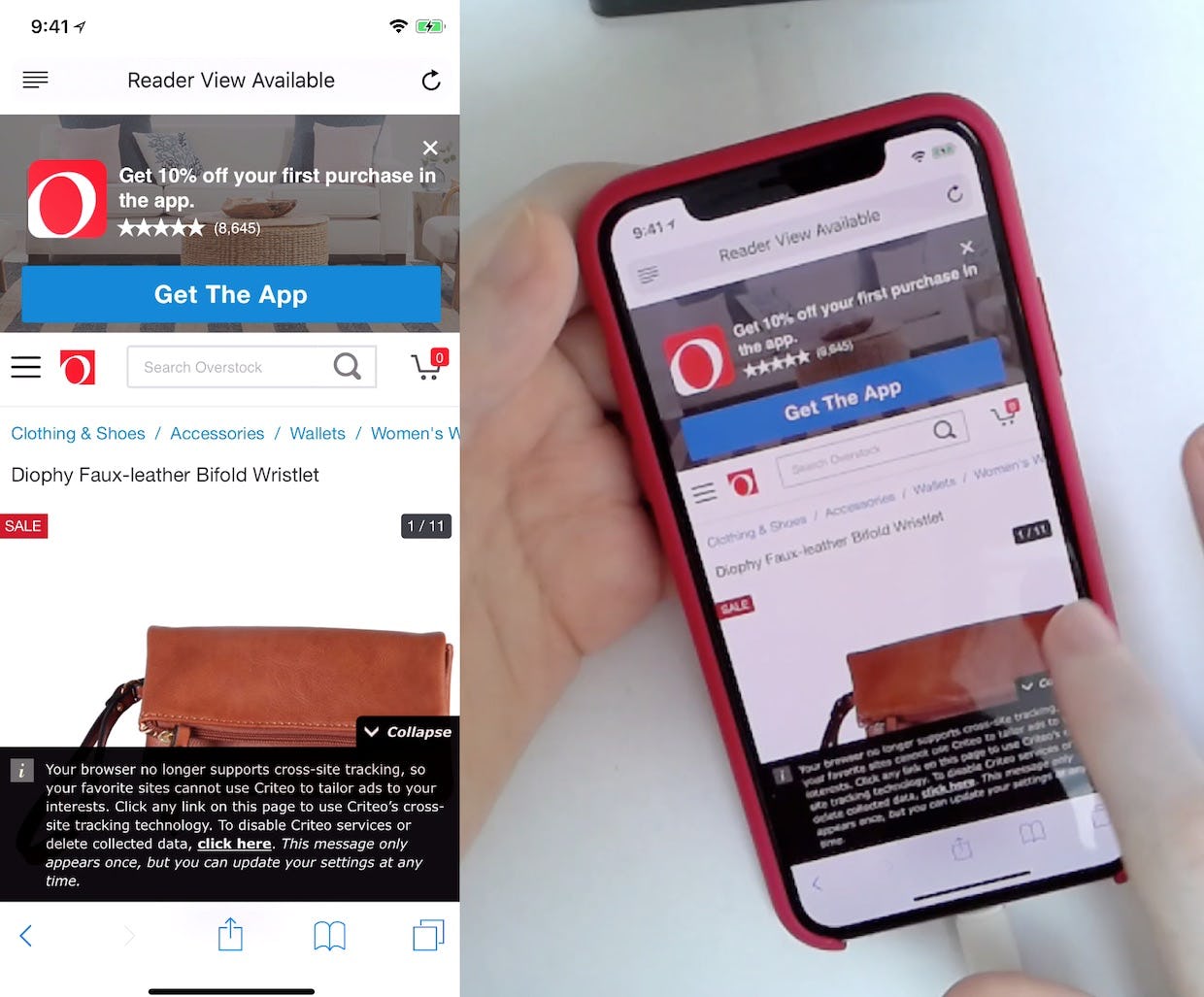 At Overstock a custom “Install App” ad, combined with a tracking privacy notice, severely limits the actual page content a user is able to see (despite using a tall iPhone XS). Even when “Install App” ads aren’t covering crucial site content they limit a user’s viewport — and therefore hinder the product-browsing experience.

On mobile, screen real estate is already at a premium, and small viewports are simply a fact of life.

However, making the effective viewport even smaller by showing an “Install App” ad — which, again, not all users will actually dismiss right away — makes it even more difficult to browse and evaluate products. This is especially true when the app ads are combined with privacy notices and other nonproduct-related content, which combined may reduce a user’s ability to see actual page content by 50% or more.

Additionally, it’s worth noting that issues were caused in testing both by the native “Smart App Banners” and custom-designed “Install App” banners.

Now, an obvious solution to the issues caused by the “Install App” ad is not to display one at all to users. In fact, 47% of sites during testing didn’t show an “Install App” ad when users were browsing the sites.

If opting not to display the “Install App” ad at all on the site due to potential usability issues, consider other, less-distracting ways the app can be promoted to users. For example, displaying the ad only on the order confirmation page (after users have placed an order) or including links in marketing emails and newsletters.

Adopting a more subtle approach may allow sites to straddle the line between disrupting users and promoting their app: ensuring that users are allowed to browse free of issues caused by the “Install App” ad while satisfying business interests to promote the app to users.

While we advise great caution before using “Install App” ads, if it’s deemed that the business case is sufficient for disrupting website users with “Install App” ads then consider the following 3 implementation details, which we observed can greatly impact the cost / benefit ratio. 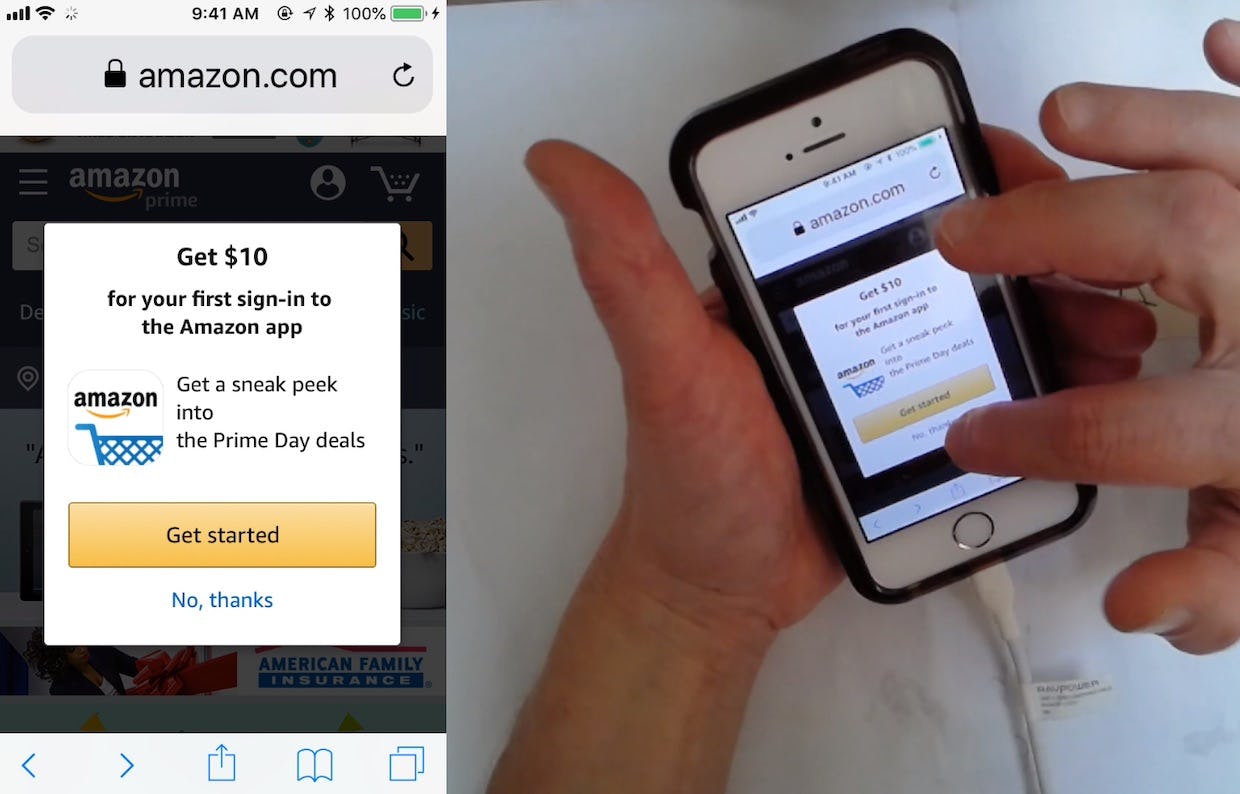 1) Incentivize users to install the app. While showing an overlay immediately on page load is disruptive, at least Amazon offers users an incentive to download their app.

1) Incentivize users to install the app. If the business case is strong enough to accept losing some mobile website users due to the “Install App” ad, then consider at least incentivizing users to download the app from the site. Offering users “10% off your first order” or “Get $10 to use after installing the app” may get more users to actually install the app on their device, and therefore may offset to some extent the users lost due to usability issues caused by the “Install App” ad on the website. 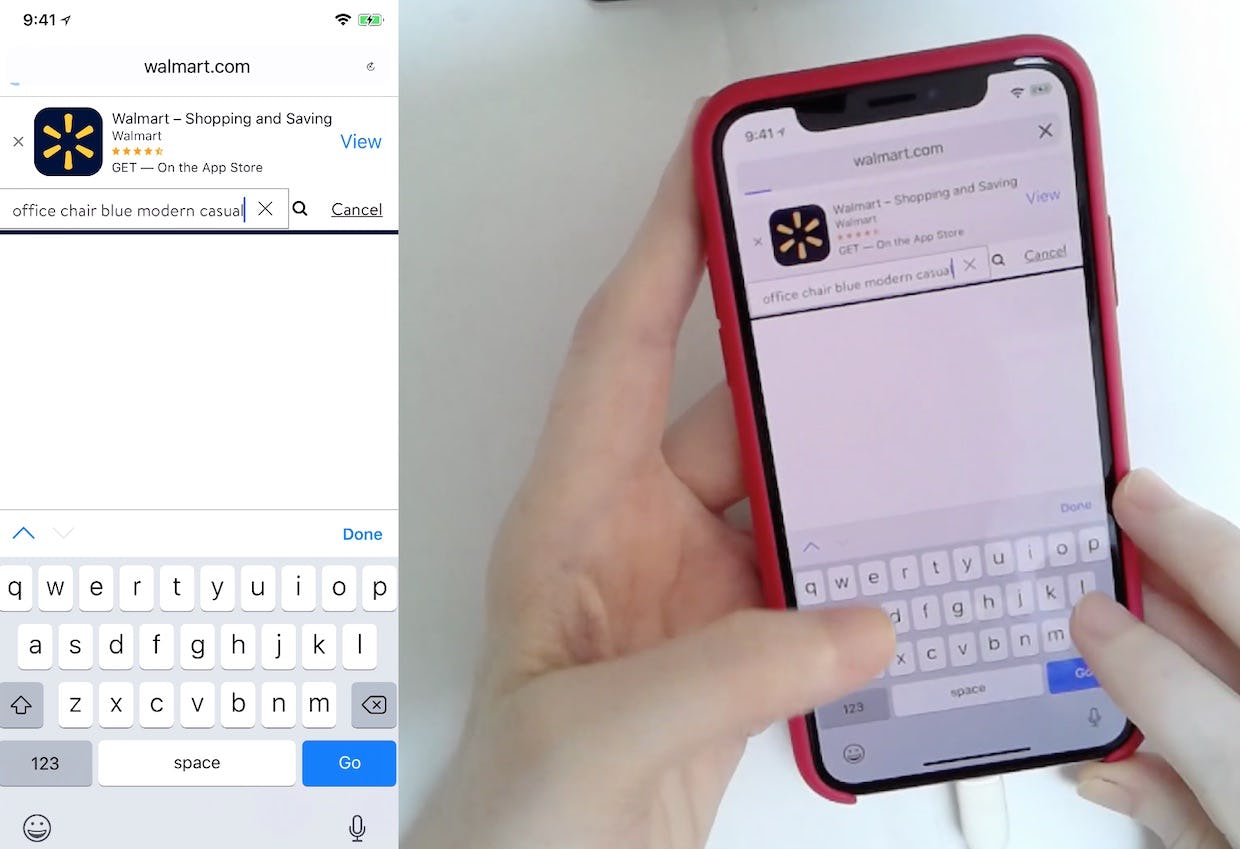 2) Don’t permanently display the ad. At Walmart an “Install App” ad persists despite this user having been on Walmart for several minutes. This is disruptive to the product-browsing experience. Additionally, it’s likely that few users will decide to download an app when they’re already minutes into their browsing on the mobile website.

2) Don’t permanently display the ad. If an “Install App” ad must be displayed, it should be removed once users have navigated to a new page on the site or have been on the same page for a certain amount of time. Once users have been on the site awhile, or have navigated to new pages, the benefit of showing the “Install App” ad decreases, while the potential to distract users is constant or increases.

As mentioned above, “Install App” ads were observed during testing to suffer from banner blindness, where some users simply ignored them. For these users, the end result will be that they’ll have a much more limited view of the main site content for the duration of their time on the site, if the ad is permanently displayed. Furthermore, these users will potentially never see some critical site elements that are hidden by the “Install App” ad. 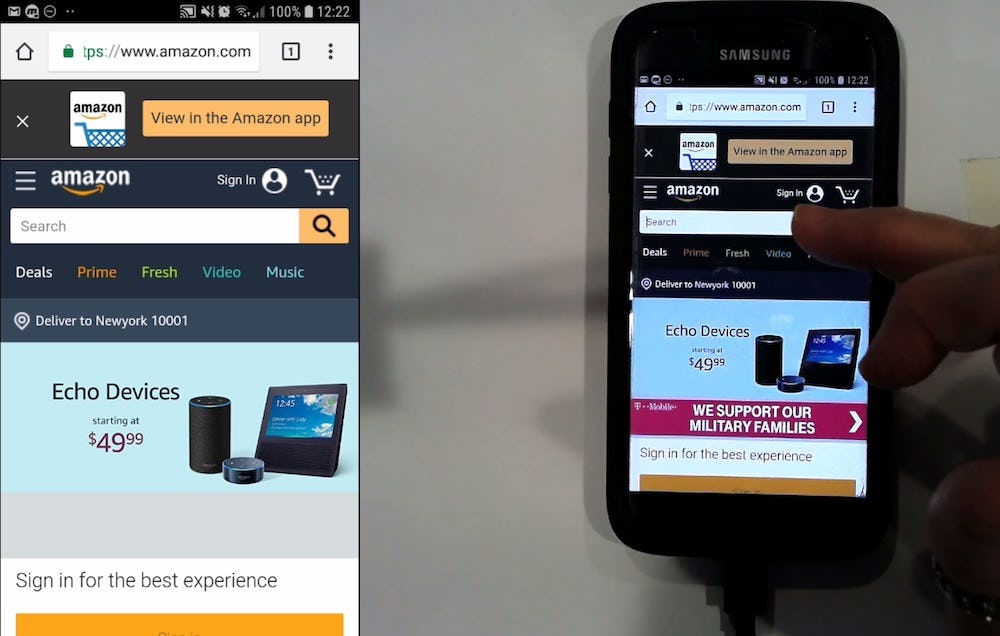 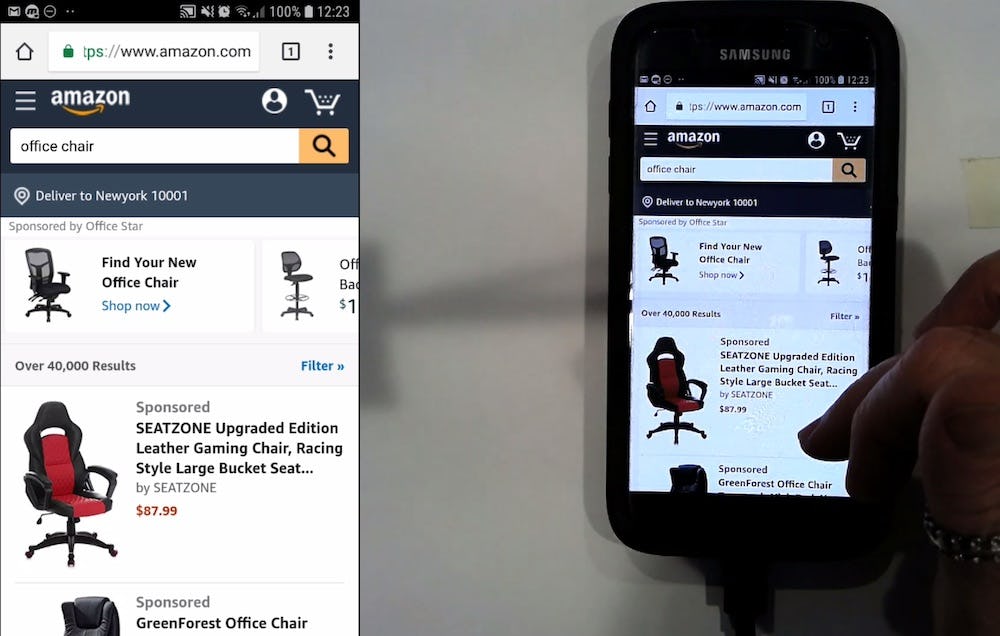 3) Show the ad only on certain pages. At Amazon, the “Install App” ad was automatically removed once this user moved from the homepage (first image) to viewing search results (second image) — greatly reducing how potentially distracting the ad is to users.

Additionally, limiting where the ad is shown will allow potential issues that the ad may be causing to be better monitored (e.g., overlaying important site elements or content). Conversely, displaying the ad universally throughout the site makes it nearly impossible to control adverse effects that are caused by the ad. 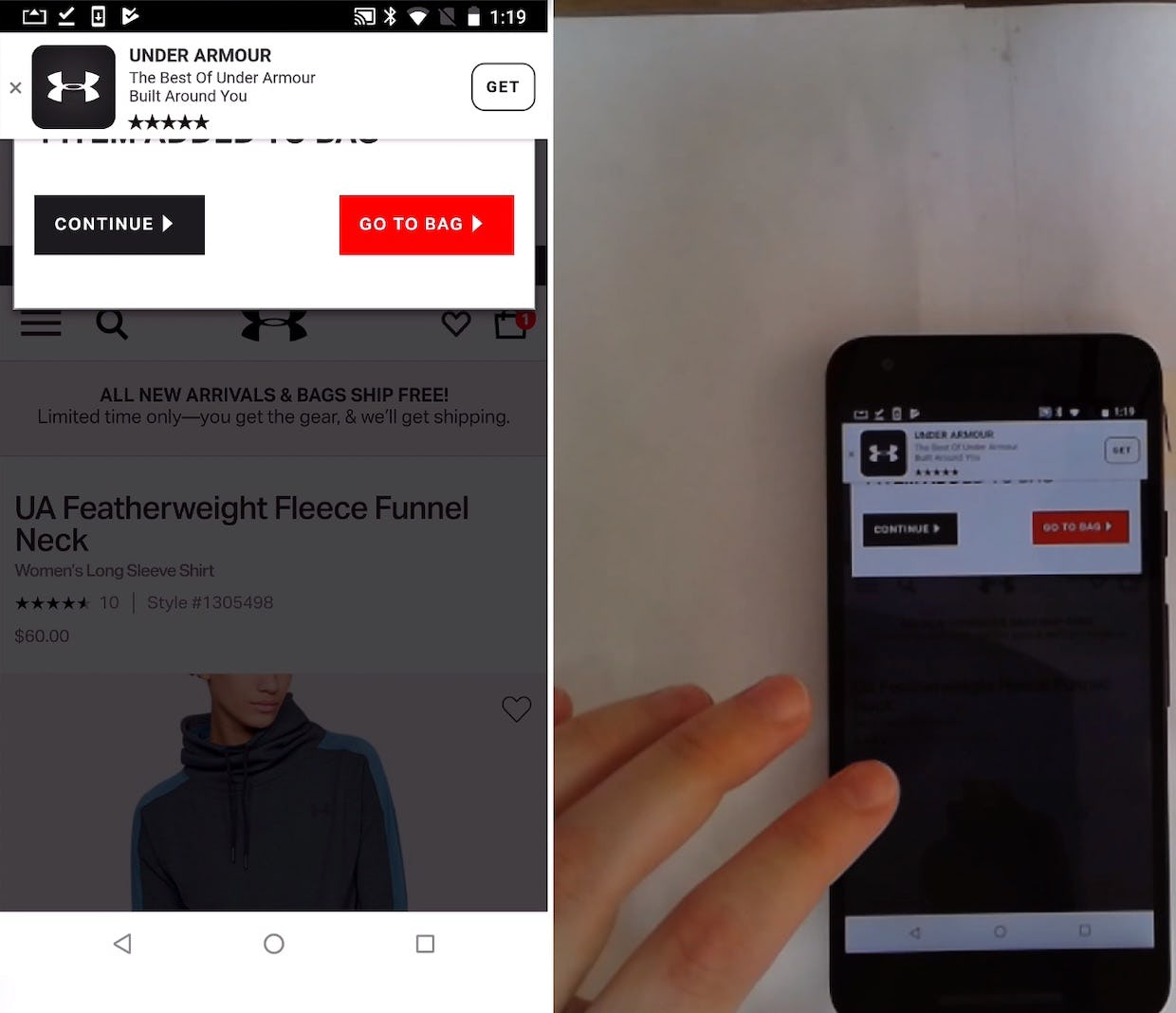 The “Install App” ad partially covers the “Added to Cart” overlay for another user at Under Armour.

Sites that choose to display “Install App” ads are clearly hoping users will download the app and then use it on their mobile device to make purchases, rather than going to the mobile website. The reasoning likely is that users using the app are likely to be more frequent and loyal customers.

However, as illustrated above, displaying an “Install App” ad to users isn’t a “freebie” and, depending on the implementation, will either directly or indirectly lead to mobile website abandonments (e.g., if users are unable to find the “Add to Cart” button or if it’s more difficult to find products using filters).

Sites should weigh these costs carefully against the benefit of having a minority of users actually install the app on their device, and then also use it instead of the website.

If “Install App” ads must be displayed to users, then be sure to minimize the disruption for users, by:

1) users are incentivized to download the app,
2) ads are temporary, and
3) ads are only displayed on a select few pages