During our two-year long usability test study on how users navigate e-commerce sites, we’ve verified that having a category navigation that uses a hover-based drop-down menu (aka a “Mega Drop-Down”) can provide major usability benefits.

In fact, using a hover-based drop-down menu for the category navigation has become a web-convention among e-commerce sites. Our benchmark of Homepage & Category Navigation of 50 top US e-commerce sites reveals that in 2013 86% of e-commerce sites used a mega drop-down, and it has remained almost unchanged since (88% in 2017).

43% of drop-down menus suffer from “flickering” issues, where users, as they try to move their mouse cursor towards a sub-category, will instead accidentally active a sibling parent category — causing the drop-down menu to change. (Note this video is slowed down by 33%.)

However, despite the popularity of using a drop-down menu, we’ve also observe that 43% of drop-down menu implementations suffer from “flickering” issues that disrupt users’ ability to control the main navigation and navigate the drop-down “frustration free.”

In this article we’ll therefore dive deeper into our usability test findings on the “flickering issues of drop-down menus,” and provide two solutions that were verified during testing.

The ‘Flickering’ Issue of Drop-Down Menus 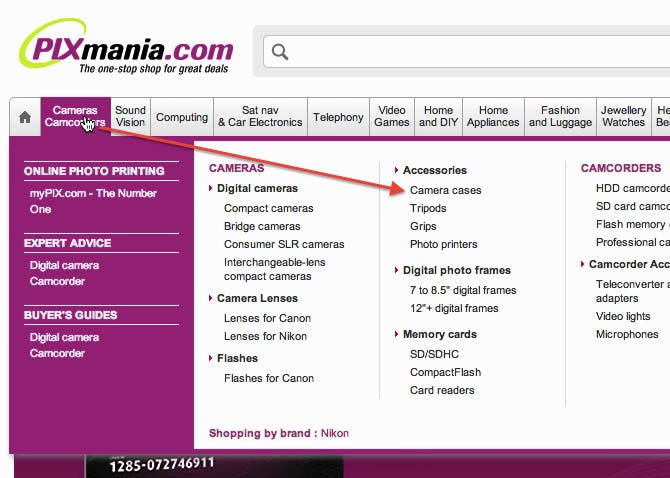 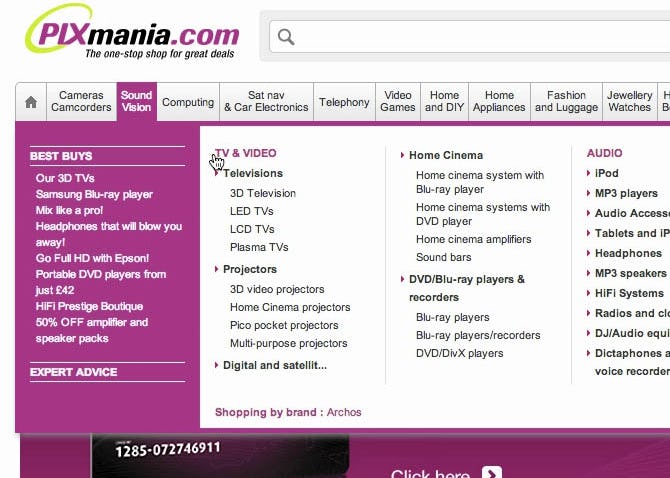 The flickering issue: here one test subject was looking for a camera case and hovered the “Cameras Camcorders” main navigation item. When seeing the sub-categories, he spotted “Camera Cases” and moved his mouse cursor in a direct line toward it (shown by the red arrow). However, this direct line of the cursor path crossed the trigger area for the next main navigation item, “Sound Vision”, and replaced the entire drop-down menu content.

During testing we see that moving the mouse cursor in a direct line towards the target hit area is such an ingrained and instinctive user behavior that the issue takes just milliseconds to provoke, and that users are often unable to even spot or articulate what went wrong, beyond noticing that “the menu just changed.” Hence, we’ve internally at Baymard named it “the flickering issue.”

At first this issue might appear as a minor interaction detail, but this “flickering” caused great frustration to all test subjects who experienced it. The consequence is that the content of the drop-down menu will change from displaying the hit area that the user has just decided is their best path forward to displaying something completely irrelevant.

To solve the accidental activation of the sibling parent category, users will 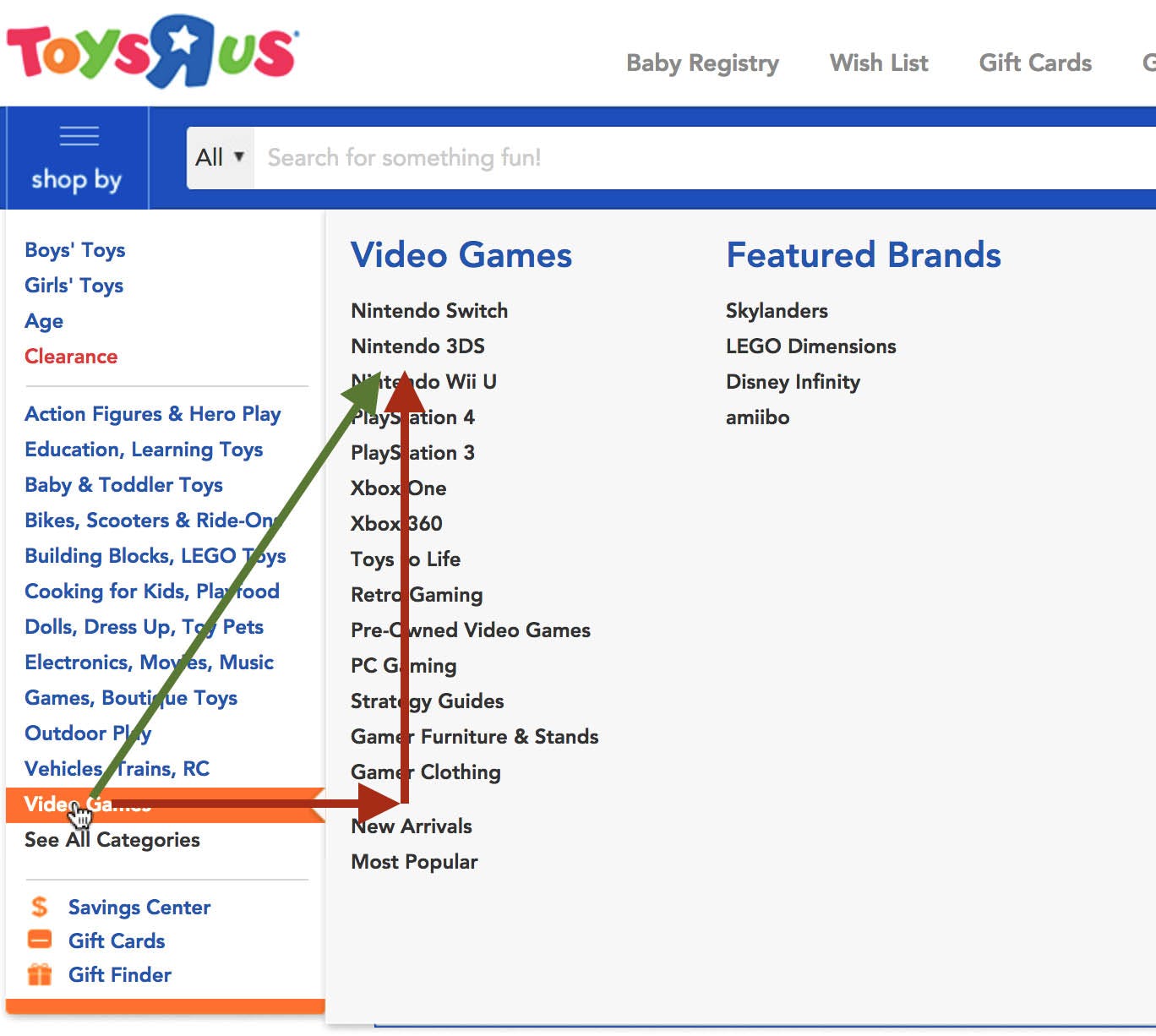 A user’s natural mouse cursor path towards the hit area will be a direct line (illustrated by the green arrow). However Toys’R’Us’s drop-down implementation requires their users to instead follow the unintuitive non-linear path illustrated by the red arrows. In practice this will cause massive flickering issues. 43% of e-commerce sites have this issue.

Due to how ingrained this low-level “direct-line” mouse cursor behavior is, we often observed users having the same issue multiple times in a row, before they were finally able to stop their direct-line mouse cursor movement and stop their accidental activation of the wrong parent category.

What makes this “flickering” issue so severe is that it’s simply caused by users trying to interact with something as vital and heavily utilized as a site’s main navigation.

One Simple and One Advanced Solution

1) The Simple Solution: A Hover Delay. A large part of the “flickering” issue can be solved by adding a minimum amount of time the user has to hover a new trigger area (the parent categories) before the current drop-down content is replaced. Typically a delay of around 300 milliseconds is observed to eliminate the worst “flickering” without introducing needless friction for intentional-hover interactions.

2) The Advanced Solution: Mouse Path Analysis. The above solution of using a hover delay is a slightly crude implementation as it has a built-in dilemma: 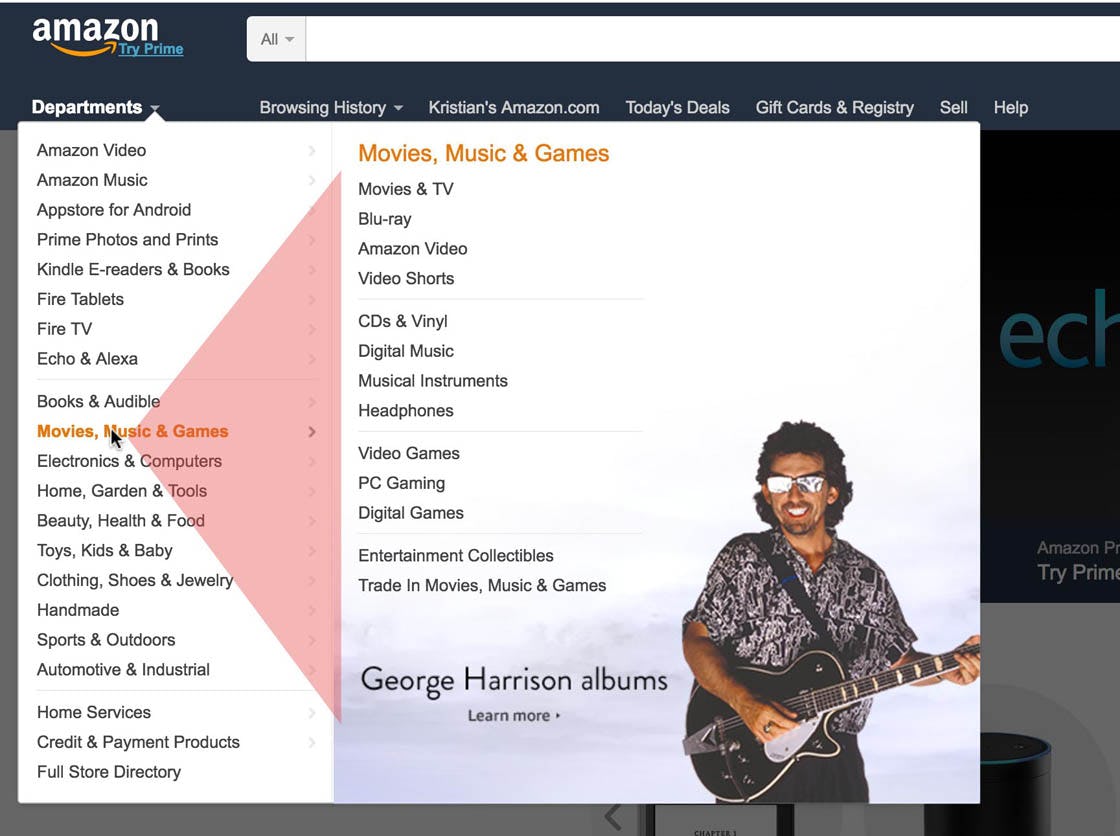 Despite having vertical menu items of very low height, Amazon solves the issue of accidentally activating sibling categories by using a mouse path analysis, that adds an extra-long hover delay if the user moves in a direct line toward any of the sub-categories of the expanded drop-down menu — we’ve here marked the mouse path that triggers the extra hover delay in red.

By using a more advanced implementation that accounts for the direction of the user’s mouse path we can create the ideal hover delay. We can eliminate any accidental activation of the sibling parent categories by adding an extra-long hover delay if the mouse cursor is moving in a direct line from the cursor’s current position towards the sub-categories. (Or just between the hit area of the parent category and its sub-categories.) In the above Amazon example this is seen in the area marked in red. At the same time we can remove the hover delay entirely when users are not moving their cursor towards the sub-categories, e.g. if they are deliberately moving it towards a sibling parent category.

Note how a Mouse Path Analysis ensures there’s no unnecessary delay when users are moving between parent categories, but simultaneously has a long delay when they move their cursor in a direct line towards the sub-categories — thus avoiding accidental activation of the parent categories.

(Tip: If a Mouse Path Analysis sounds like too-much coding, Ben Kamens has kindly provided us all with the jQuery-menu-aim script that has this exact type of behavior.)

While the overall concept of a hover-based main drop-down menu is great, real life implementations often fall short, as we find that

For something as important as the site’s main navigation, using either a basic hover delay or the more ideal Mouse Path Analysis is required to attain a good performance for any hover-based drop-down menu where users can otherwise experience “flickering” issues by accidentally hovering sibling parent categories.