Accessibility in E-Commerce: Use ‘ALT’ Text to Communicate the Core Content of “Informational” Images (55% of Sites Don’t) 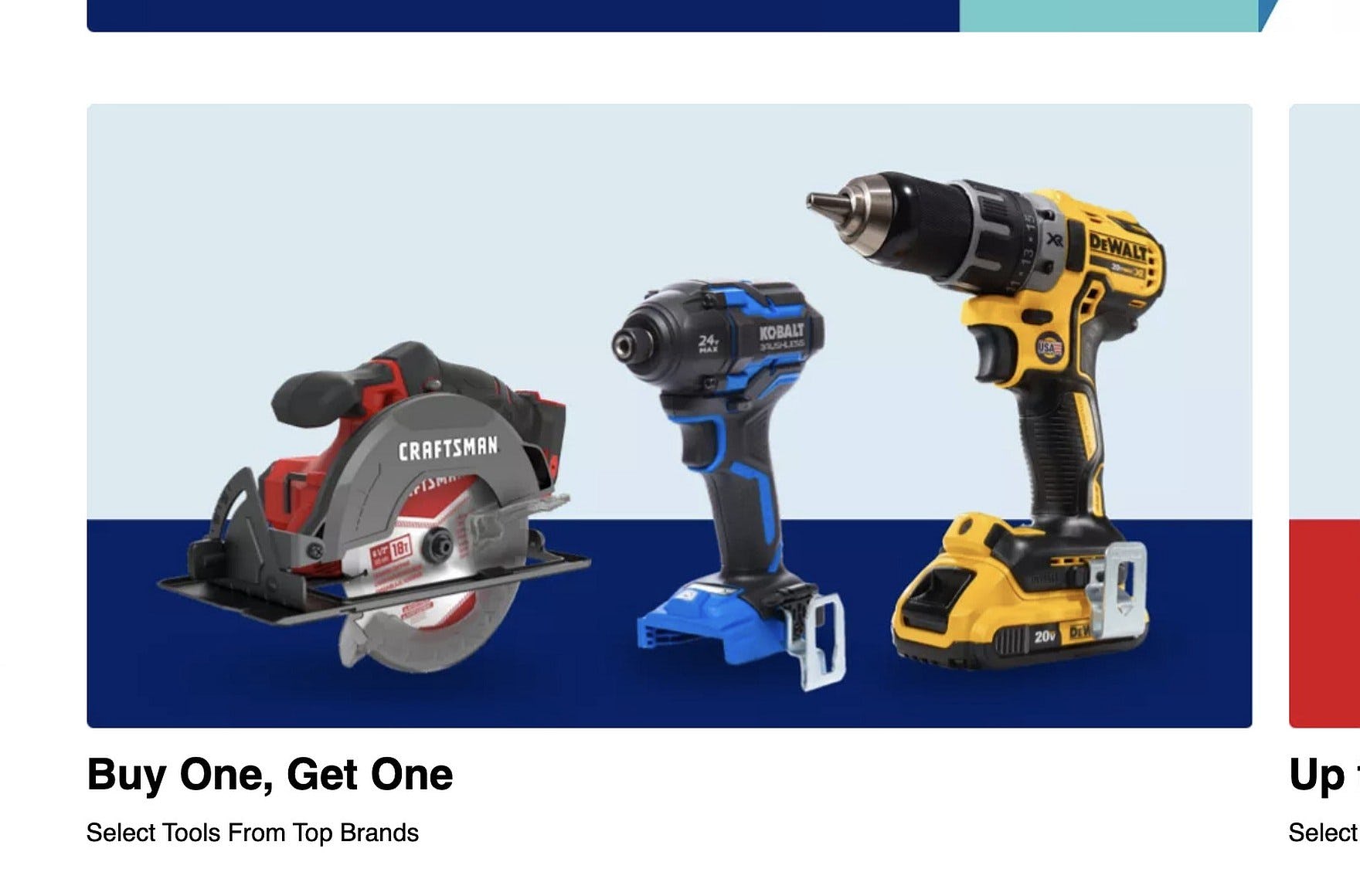 So-called “Informational” images are principally designed to convey information of some kind to users — for example, an image displaying an assortment of different tools for the “Hardware” category or an illustration or diagram breaking down a complex product feature — and are often key to navigating a site.

Yet our rating of 33 top-grossing sites, conducted during our research on Accessibility in e-commerce, reveals that 55% of e-commerce sites fail to meet basic accessibility requirements when it comes to “Informational” images — resulting in a subgroup of users being unable to obtain the information that’s being communicated visually by the images.

Given the general importance of images, this can quickly lead to users abandoning the site.

In this article we’ll discuss 1 basic requirement for making images accessible to users aided by screen readers and other assistive technologies:

Additionally, we’ll discuss 2 specific pitfalls to avoid when attempting to provide images that are accessible to all users:

This simple diagram, originally used by IKEA to transcend language barriers in their instruction manuals, includes an alt text tag (alt="Picture of recommending to work with more than one person") to ensure that the meaning of the image is still communicated to users with visual impairments.

The foundation for making “Informational” images (or other visually based content, such as icons) accessible to screen readers is “alternative text”.

“Alternative text” is provided by the HTML alt attribute, which must be included within the HTML element container of the image.

When an image with properly implemented alt text is encountered by screen readers, any text content following the tag will be read aloud to users. Therefore, proper alt text content should effectively communicate any relevant visual information that would be seen by sighted users, along with any additional functions of the image (such as an image acting as a link to a category page).

If the alt tag is not included, screen readers are likely to announce unnecessary or irrelevant content to the user — such as the image’s lengthy alphanumeric filename (see video at the end of this article for an example) — unnecessarily wasting users’ time.

Moreover, users with visual impairments will still be left guessing as to the meaning of the image after listening to this useless information.

That said, alt text for “Informational” images doesn’t need to be an exhaustive textual reproduction of every visual detail of the image.

For example, in the IKEA example it is not necessary to inform users with visual impairments that the image has “One person holding a hammer and frowning…etc.”; rather, the essential meaning behind the image is that “It is recommended to build the product with more than one person”.

Therefore, the baseline requirement for making an “Informational” image accessible to users with visual impairments is only that the core meaning or message of the image is conveyed.

Additionally, as disabilities can present together (e.g., visual impairment may come along with or as a result of cognitive impairments), economizing alt text information can make the site easier to understand and navigate for those with cognitive, as well as visual, impairments. 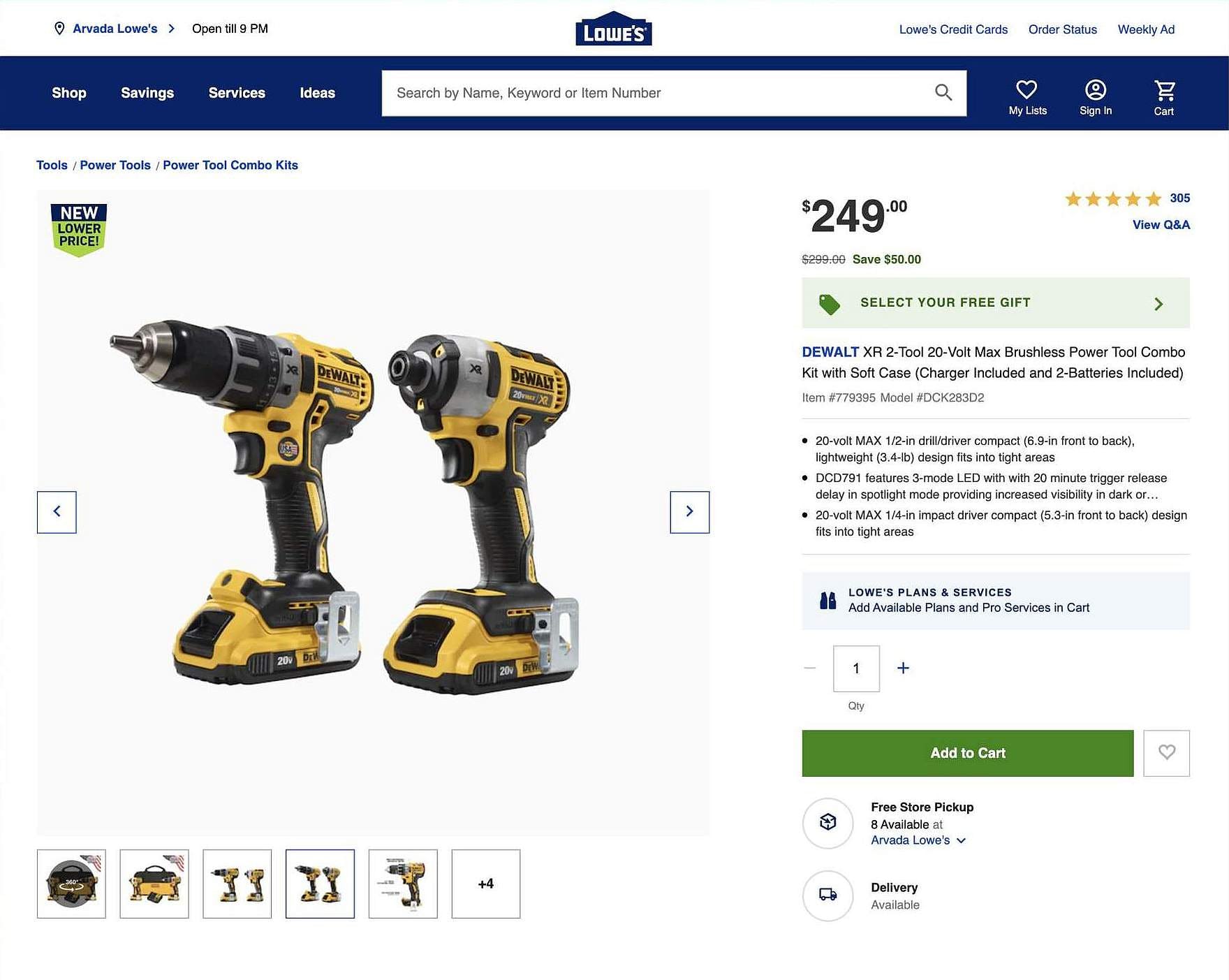 At Lowes, most of the visual elements on this product page have alt tags. For example, there is the primary alt text for the product image (DEWALT Power Tool Combo Kits #DCK283D2 Product Image #3), then there is an additional alt tag for the badge at the top (new lower price), and finally there is an alt tag for the review stars (5.0 out of 5 stars with 305 reviews). Together these tags convey all the necessary nontext information visible on the page. Note, there is no separate alt tag for the thumbnail image.

Furthermore, note that if an image contains multiple, semi-independent visual components, then an alt text tag for each component is necessary (as long as those components are not for decorative purposes).

At Lowes, for example, even though the product image appears to sighted users to include a badge declaring that the product has a “New Lower Price”, the badge is an independent HTML element — which can be added or removed from the product image — and will therefore be read separately by screen readers.

While this may seem like an unnecessarily added implementation detail, separating the badge’s alt text from the product image’s alt text allows for more flexibility — as the same badge image can be swapped out and used across several products.

However, if the information presented in an image is also presented nearby or with accompanying text — such as a nearby caption — the image can simply be treated as “Decorative” and therefore only requires an empty alt tag.

Providing alt text for all relevant “Informational” images is the first step toward making a site’s images more accessible.

Yet there are also specific implementations of “Informational” images that require additional accessibility considerations.

An example of an image at Overstock with embedded text. While alt text is included that informs users aided by screen readers of the existence of the promotion (“Shop this wonderful promotion”) and that the image acts as a link (“Graphic link”), it fails to fully communicate the information contained in the image (e.g, “Extra 20% off Rugs”).

In particular, images with embedded text can be particularly problematic.

The core issue from an accessibility standpoint is that text that is embedded within an image is essentially “frozen” in the image.

For users using screen readers, the embedded text won’t be read by the screen reader, unless the text is reproduced in alt text.

Additionally, for users with milder visual impairments (which don’t necessitate using a screen reader), embedded text often doesn’t scale appropriately when viewed on mobile devices (which sighted users will notice as well, and often chalk up to being a “design bug”).

Consequently, if an image with embedded text is designed for a desktop viewport, but is then viewed on a mobile device, the text will likely be too small to read.

Additionally, users with visual impairments can also run into problems when the text embedded in images doesn’t have sufficient contrast (at least a 3:1 contrast ratio) against the background image.

Therefore, in the vast majority of cases, text embedded in images should be avoided.

When images with embedded text can’t be avoided, or would be too difficult to switch out, including an alt text tag summarizing the embedded text content can avoid this difficulty for users aided by screen readers.

However, users aided by other types of assistive technology — such as text magnifiers — may still struggle with the “frozen” text.

Another specific implementation for “Informational” images to be aware of are complex images.

For example, size charts on apparel sites, instruction manuals (as you would find for assembling a product at IKEA), or image-based spec sheets.

This size guide at True Religion is presented only as an image with alt="Men's Size Guide" announcing the purpose of the image, but not any of the information contained therein — which is what a visually impaired user would need if they visited this image. Complex images such as size guides need to be carefully presented — typically as a table — to make them accessible to users with visual impairments. 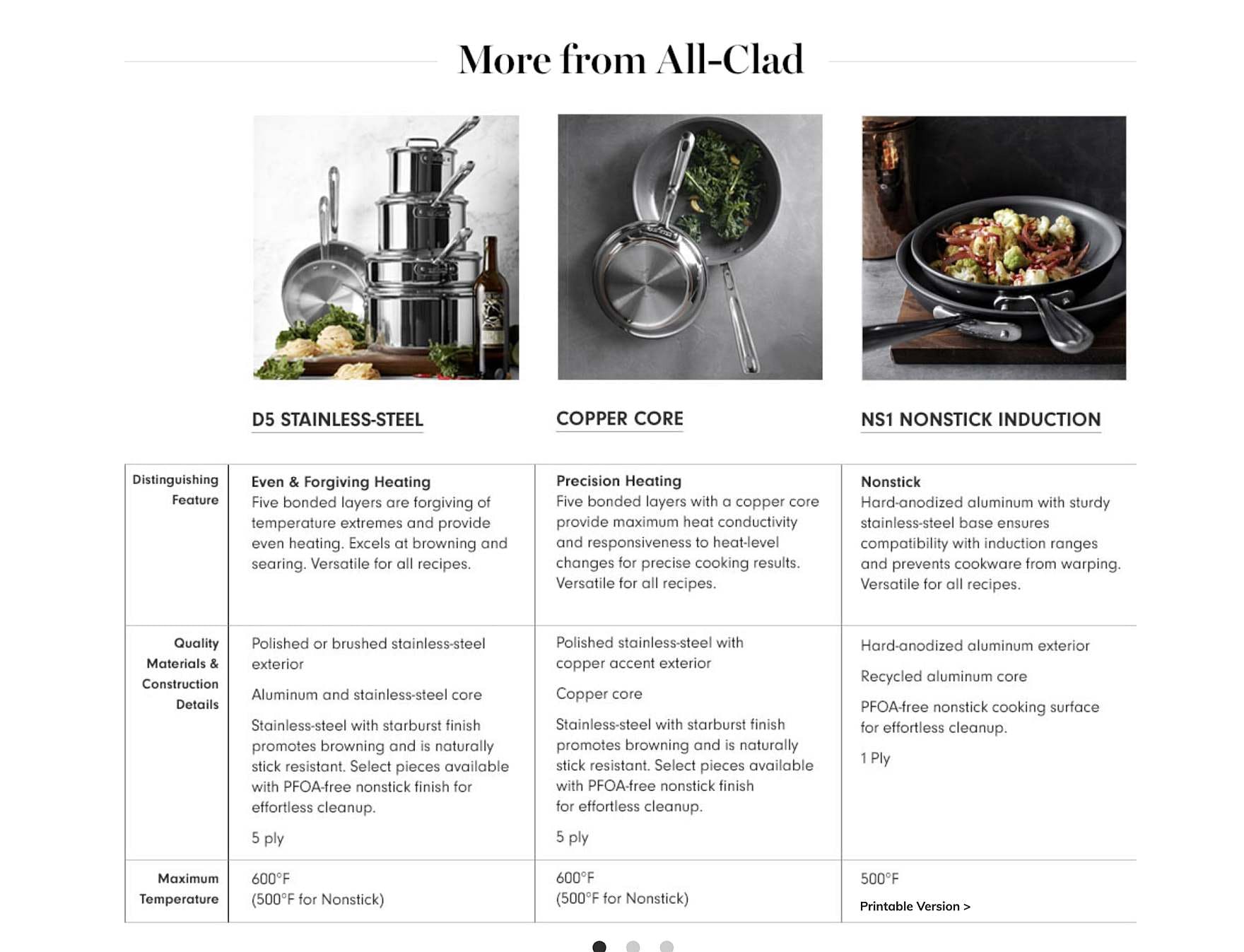 At Williams-Sonoma, detailed product information in the “More from All-Clad” section is visually given in a table format, which is easy for sighted users to read. Unfortunately for users aided by screen readers, the product detail tables are implemented as images with unhelpful alt text (alt="desktop-allclad-compchart-1"), meaning users with visual impairments will not be able to have access to the same information as sighted users — which is required for maintaining accessibility.

While the informational content in most images is simple enough to be communicated via an alt text tag, complex images — such as a size chart or product spec sheet — contain such a depth of information that communicating that information via an alt tag would be almost impossible. 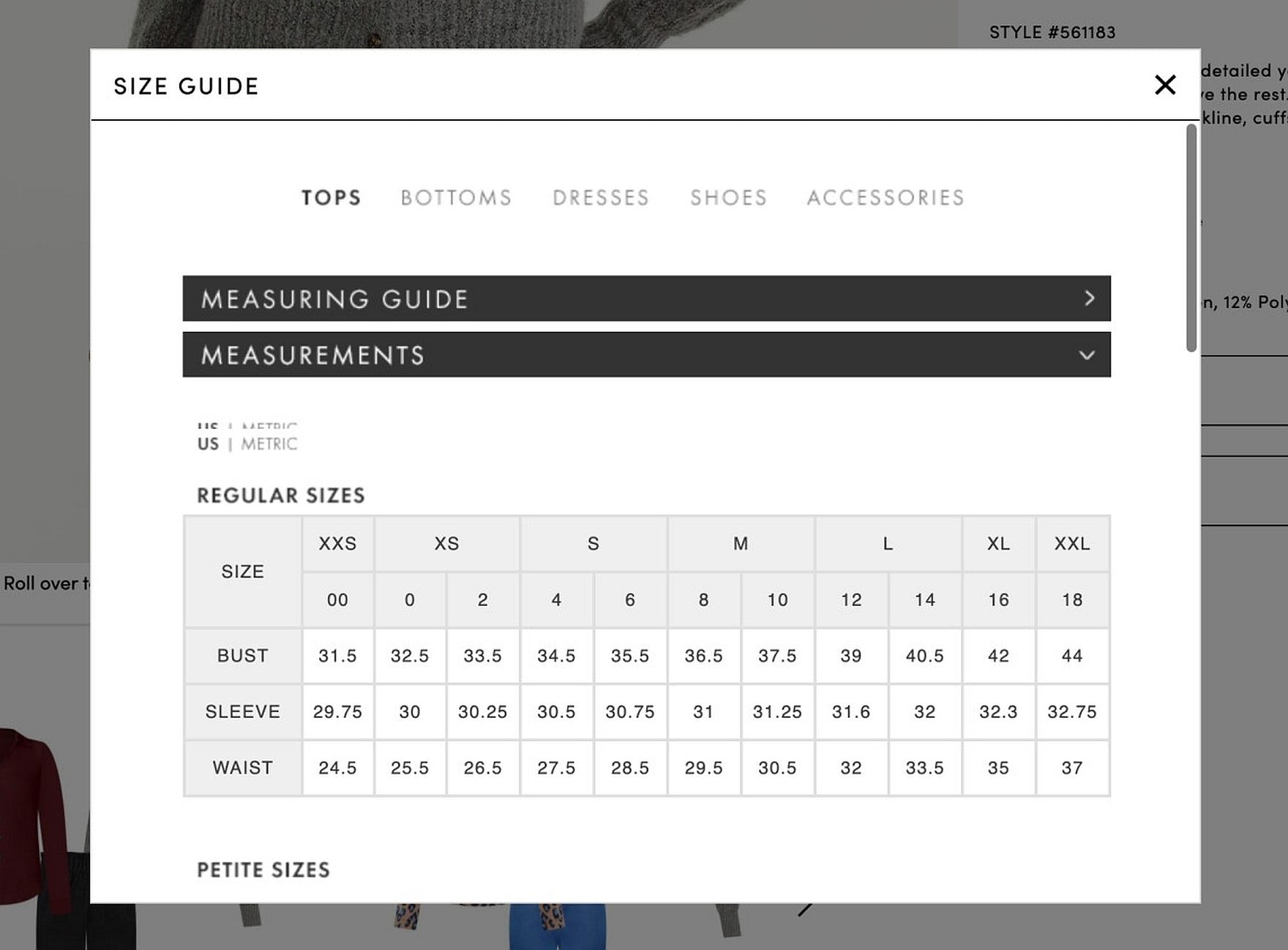 At Ann Taylor, the size chart is presented as a table, which, if implemented correctly, is easily accessible to assistive technologies like screen readers.

To avoid this issue, complex information shouldn’t be conveyed in an image but rather be presented to users via an HTML table or other text format accessible to users aided by screen readers.

If a complex image must be used, a short alt text description can be provided which identifies the purpose of the image (e.g., “Size Chart”) and describes the location of further information.

Ensure “Informational” Images Are Accessible to All Users

At Sears, in the first part of this video, the “Up to 30% off Fitness and Exercise” image is properly implemented with descriptive alt text (alt="Up to 30% off Fitness and Exercise"). However, in the second part of this video, when the alt attribute is removed, the image’s filename is read instead (“B1340929699…”) — illustrating the experience a user using a screen reader would have if descriptive alt text isn’t provided.

With many sites leaning heavily on images to communicate key information, it’s critical to ensure that “Informational” images are accessible to users using screen readers or text magnifiers, as well as users who have other accessibility needs.

Yet 55% of sites fail to provide descriptive alt tags for “Informational” images — making the information conveyed by the images inaccessible to a subgroup of users.

Additionally, 64% of sites use embedded text in images, which isn’t read by screen readers and can be hard to read for visually impaired users.

Moreover, 9% of sites use an image for presenting complex information, which, for a subgroup of users, is as bad as not having the information presented at all.