When & How to Implement Interactive Swatches on Mobile Product Listing Pages 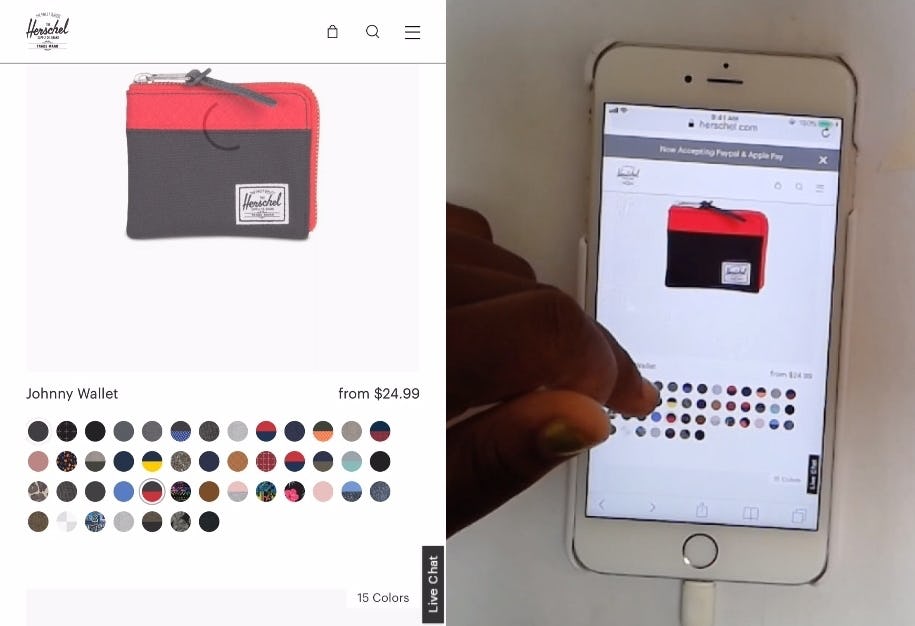 The color variations a product is offered in is a key purchasing decision for many users’ when shopping in industries such as apparel, home furnishings, and beauty. Consequently different product types, from appliances to apparel, are offered in different colors. In fact, our benchmark of the top 60 US and European e-commerce sites shows that 88% of sites have color as an available variation for at least some of the products. 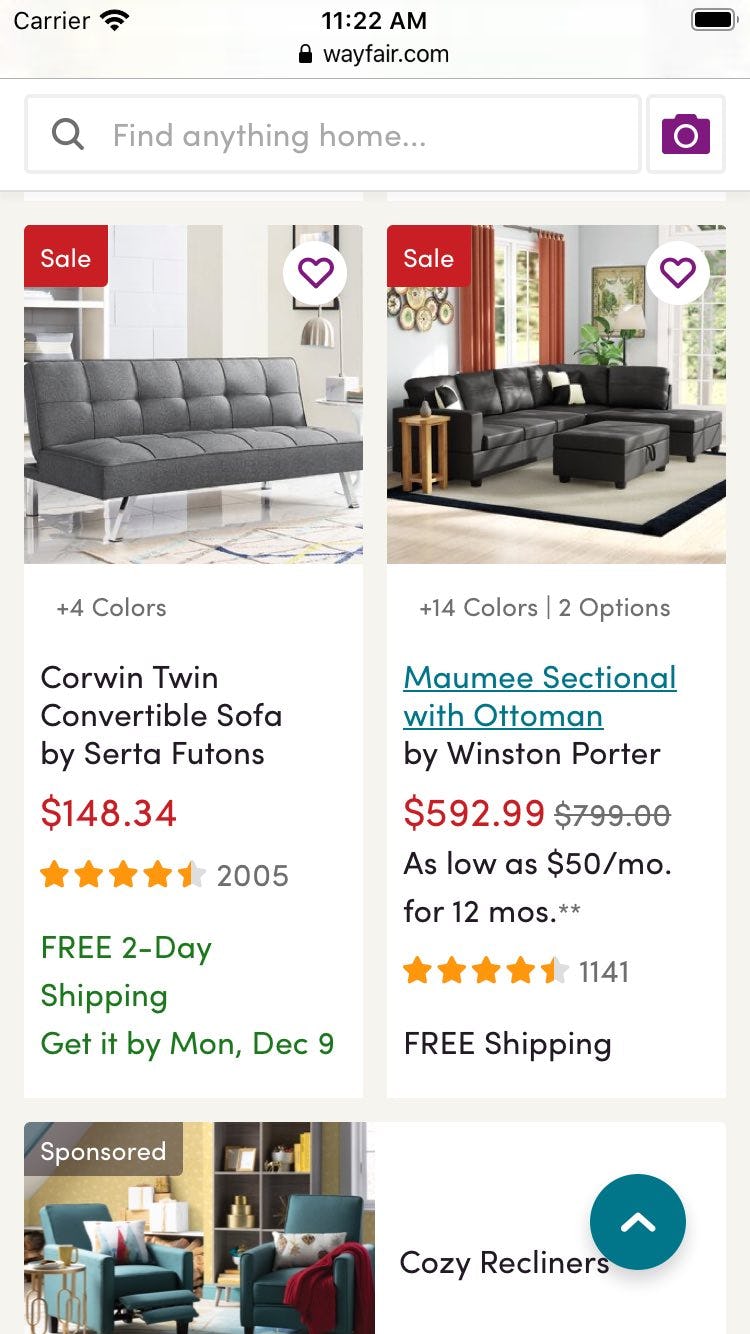 While Wayfair does indicate that there are variations available within the list item information, this could be easily overlooked when the user scans the product list, as it’s only indicated through text.

While the color variation can be indicated via a simple text statement, as seen in the Wayfair example above, our large-scale mobile usability testing showed that users overlook color indicators shown in text in general, but especially if the text did not stand out clearly from other list item info (see 3 Key Design Principles for Product Listing Information). For example, text like “more colors” appended at the end of list item info, in the same color and size as other text is hard for users to discern when scanning a product list.

An alternative to simply stating that there are visual variations, is to include color swatches (something that we generally recommend), which immediately show the user just what color variations are available. But some sites don’t stop there. We see sites taking this concept one step further and including not static but interactive swatches within their product lists.

However, implementing interactive swatches on mobile isn’t as simple as it seems, and we’ve found there are three common usability pitfalls sites should watch out for when using interactive swatches on mobile product listing pages. In this article, we’ll share the test findings from our mobile UX research study related to displaying color swatches. In particular, we’ll discuss:

If implemented carefully, interactive swatches in the product list can provide users with great visual information with less friction, compared to going back-and-forth from the product list to individual product pages. On Nordstrom, users can interactively preview color options easily by tapping on swatches without the need to visit product pages.

During our large-scale Product Lists usability testing, it is recommended to include color swatches over simple text statements to both indicate that multiple visual variations are available for a product, and to indicate what exact colors the variations then are. Using swatches within the product list alleviates issues with users missing or overlooking a text statement and therefore not realising that a visual variation is available, as well as providing the user with visual examples of what these colors. But even with swatches, the only way that the user can see what the entire product looks like is to visit the product page — right?

Instead, sites can provide interactive swatches to their users. Interactive swatches in product list items allow users to preview different color variations shown in thumbnails by tapping on swatches. With interactive swatches, users can avoid visiting product pages in order to see different color variations for a particular product, and can quickly compare different items without leaving the product list. As one mobile user said, “I like the idea that I click the icon [swatch] and I get the different pattern, without needing to click into the [product details] page, because I can really see all of the available options without needing to load a page and then back out again”.

Remaining on the product list to review and compare products at a high-level means that the user can spend more time reviewing the actual product selection at a site, rather than spending time bouncing between product list and product detail pages. Especially in purchasing contexts where how the product looks is the main qualification or disqualification factor for a product (along with price and brand), allowing users to see the color variation they might be interested in, without having to visit the product page can significantly reduce product exploration friction.

Issue 1: Too small and too tightly spaced swatches 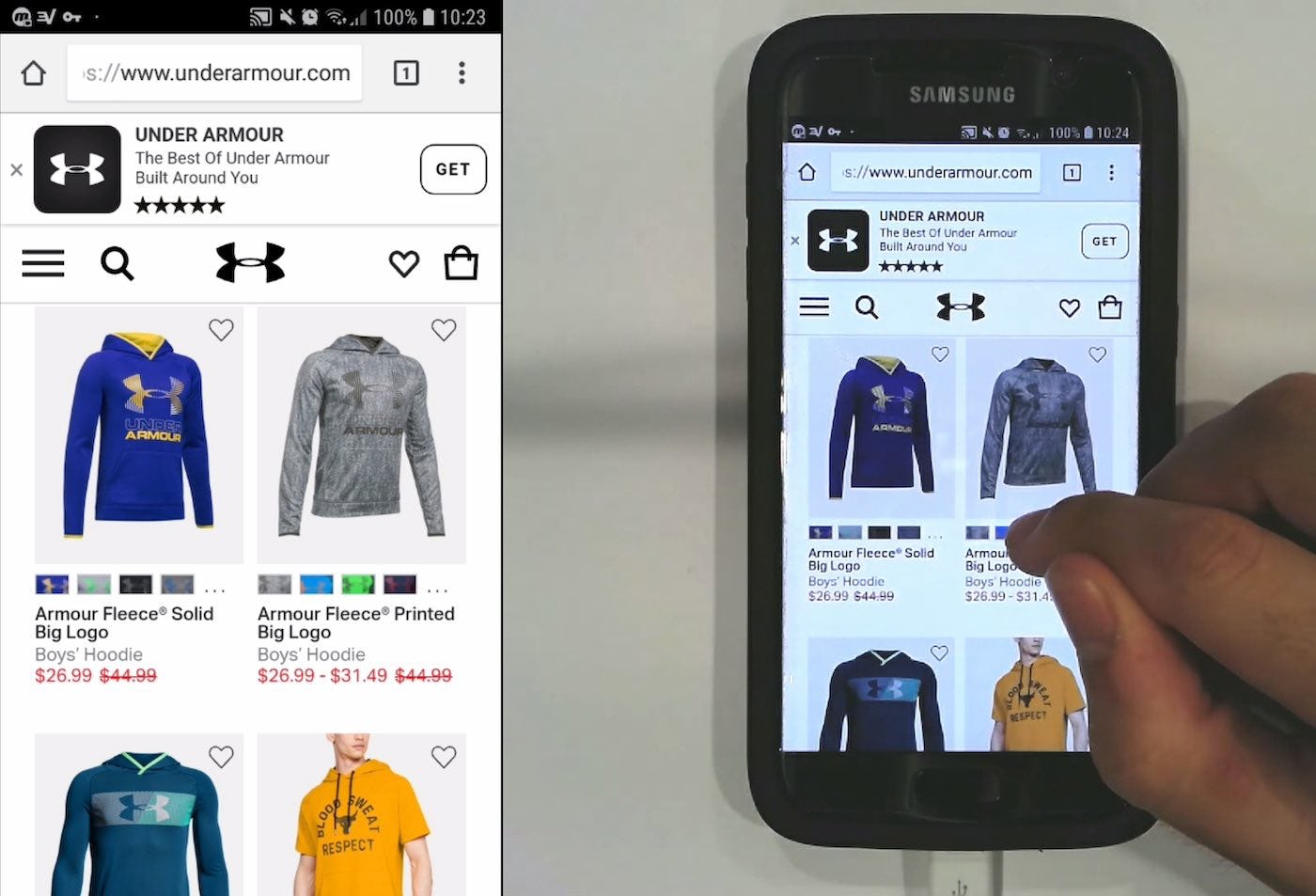 Small hit areas are hard for users to tap successfully. If swatches are interactive and are too small or have inadequate spacing, users will find it hard to tap the correct swatch to preview the color or pattern of interest.

The first issue observed during testing was that the size and spacing of the swatches in the product list directly impacted users’ ability to use them effectively. If the hit area of the interactive swatches is too small, or if swatches are too close together, users will have difficulty interacting with them.

Our testing has shown that there is a minimum hit area on mobile devices of at least 7mm x 7mm, and a minimum spacing between tappable elements of 2mm, to ensure good usability for interacting with mobile site elements. If swatches do not meet these requirements, some users will end up tapping the wrong swatch, while others will find it overly difficult to tap the swatch they’re interested in. As the adjacent elements in the product lists are mainly other hit areas, a tap registered to be outside of the swatches often won’t just result in nothing happening, but rather that the user is (unwillingly) sent to a product page — greatly increasing the consequences of accidental taps. 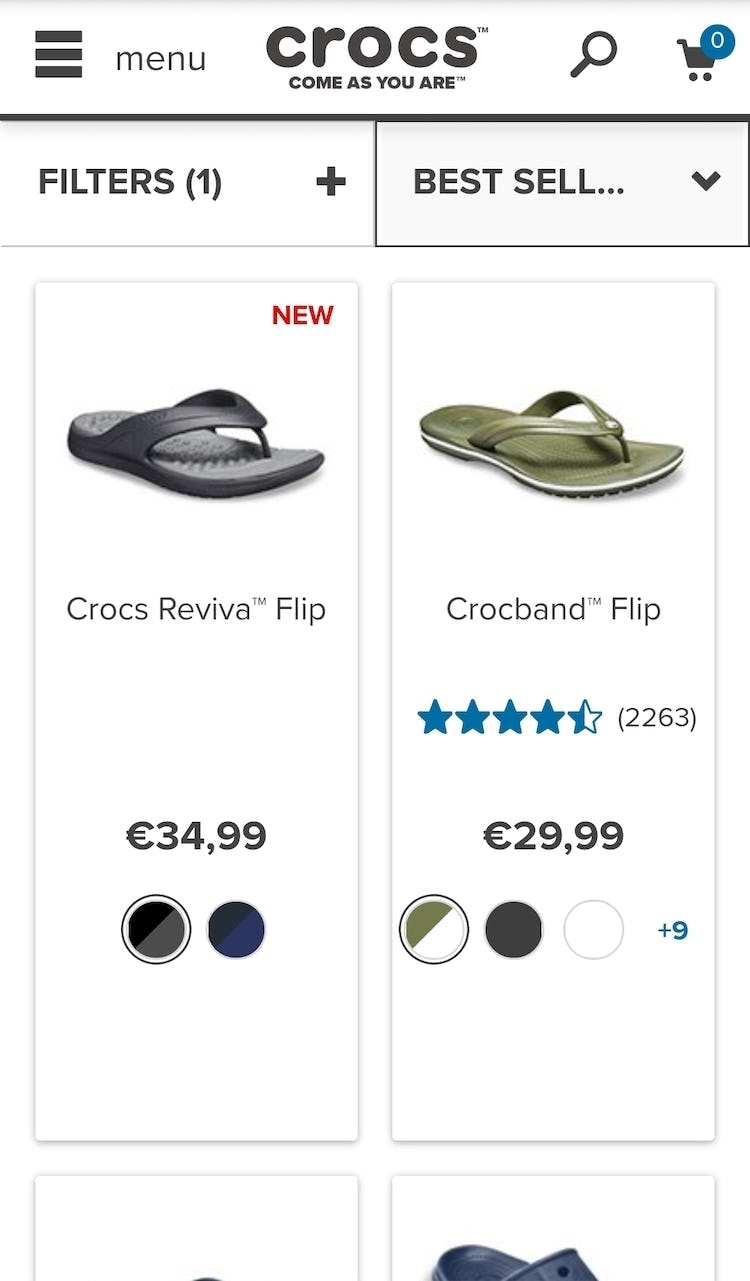 While the interactive swatches on Crocs are large and well-spaced (although the list items are too tall), their effectiveness is reduced due to truncation. For example, in the second list item there are 12 variations of that sandal and only 3 swatches are shown. As a result, users will need to visit the product page to see all color options — which is highly likely, given that 75% of the color options aren’t visible in the product list.

The second issue we observed during testing relates to truncation of swatches — shortening the full list by only showing some of what’s available. If only some swatches are shown in the product list, users won’t have the option of previewing all color choices without visiting the product page.

So if there are, for example, 12 color variations of a product but only 3 swatches displayed in the list item (like in our Crocs example, above), users will be able to preview only a quarter of the variations in the product list — which isn’t especially helpful, as most users will then still have to go to the product page anyway to understand what colors are available, as it’s difficult to say no or yes to something without first knowing what all of the choices are.

Even if there’s only one color option that’s truncated, users wanting to make an informed decision will often want to see all the options as they don’t know what they are saying no to.

Hence, if users need to visit the product page to see all variations, the value of the interactive swatches is greatly reduced. 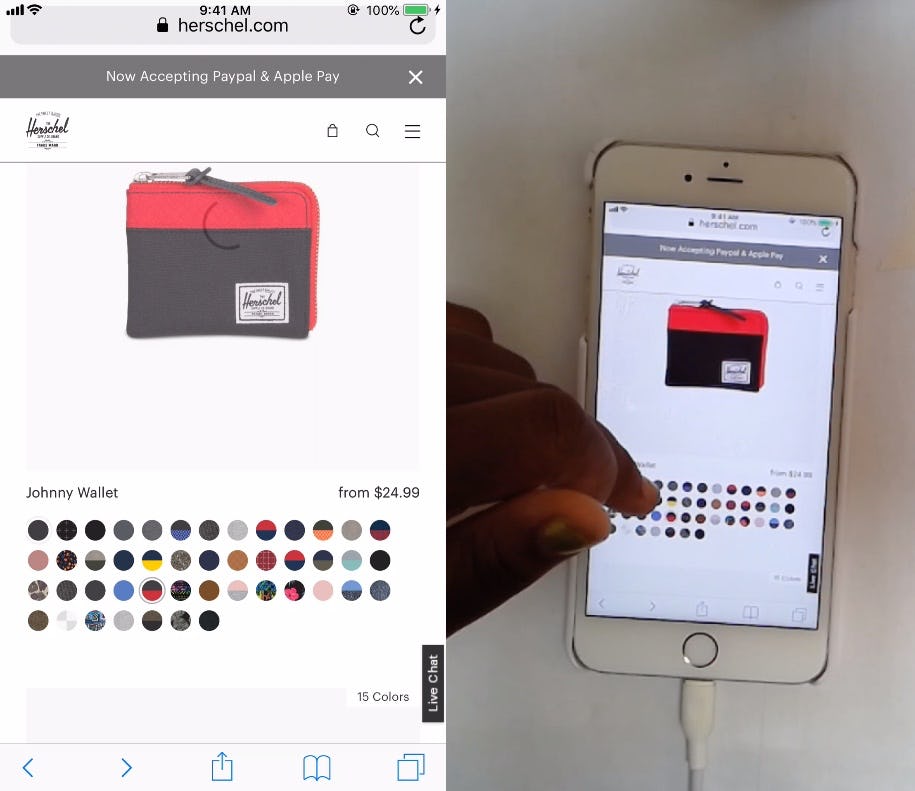 Not truncating swatches can also cause issues. When interactive swatches are not truncated, as on Herschel, they can cause list items to become too tall. Although there is a lot of unused white space, the four lines of interactive swatches are a key factor in the excessive height of the list items (which we observe cause mobile users to loose their overall overview of the product list).

However, showing all interactive swatches in product lists can also cause an issue — they can cause list items to become too tall. In our testing on the sites where the list items were taller than half the screen height, nearly every single user had severe issues navigating the list, and often got “lost in the list” multiple times (see guideline #933 for more findings mobile list item height, if you have Premium access). Trying to cut down the overall height by minimizing the size of the swatches leads us back into our first issue and continues to cause problems.

Here a user is exploring the many shades of a lipstick on Walgreens where the interactive swatches can be scrolled horizontally. This is indicated by truncating the swatch on the farthest right edge of the list item (without the truncation users would have no way of knowing there were more swatches to view).

One way to avoid these issues is to use a horizontally scrolling list of swatches within the product list items where it’s necessary. It’s important to ensure that the ability to scroll through the swatches is obvious to users by indicating clearly the presence of more swatches (e.g., by partly truncating — only showing half — the final swatch on the right). Also the swatches visible by default should be chosen to show the diversity of all the colors available, or the most popular.

Horizontal scrolling solves the issues otherwise caused by either truncating swatches or by displaying a too high number of swatches in the list item (causing excessively tall list items). During our testing, the mobile users had no difficulty scrolling horizontally to preview multiple colors, as long as the swatches have sufficiently large hit areas and spacing between them.

Issue 3: Users not noticing the product image has updated 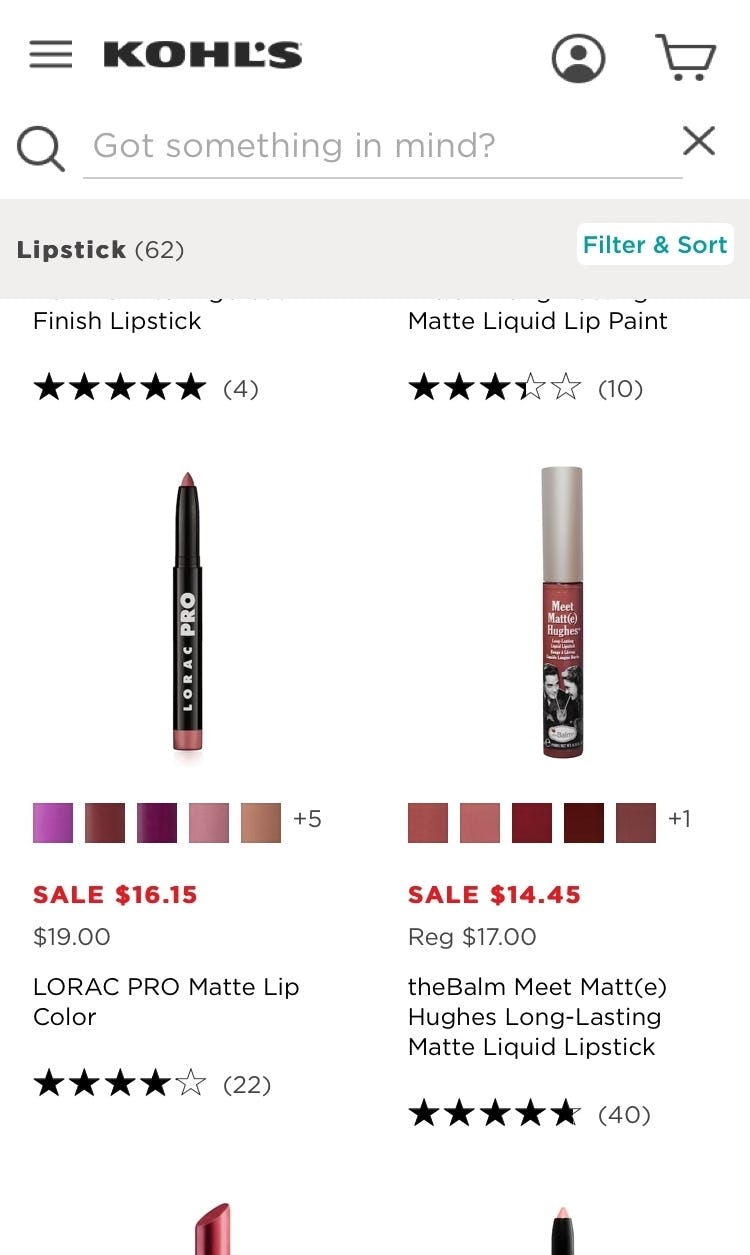 Due to the type of product and focus of the image used on Kohl’s users may not be able to tell that the product image has updated and miss out on the benefits of interactive swatches.

If users can’t see the color change clearly in the thumbnail, there is no point in having interactive swatches. One cause of this issue is if the thumbnail itself is too small, making it hard to detect differences between similar shades. Another reason for users not seeing the color change clearly could be that, despite the thumbnail area is sufficiently large, the part of the product that changes color is too small to see clearly (e.g., if only the cord of a headphone changes color).

On boohoo, the product image updates as the swatch is selected. This allows the user to clearly see that a change has been made and look at what the product would look like in different colors without having to leave the product listing page.

Thumbnail images must be large enough to depict all key features, and, if interactive swatches are implemented, should be zoomed to show the part of the product that changes color when the swatches are tapped.

When properly implemented, mobile users can save time by viewing and comparing multiple color variations directly within the product list, without having to visit an array of product pages only to see the possibly desired product in the possibly desired color. Interactive swatches are particularly useful on sites where color variations seriously affect users’ purchasing decision. For example, sites selling visually-driven products such as apparel, some beauty products, home decor, and furniture.

For sites where color variations are less important to the target audience, it’s worth mentioning that our testing also showed that simply making the list item one large hit area, and taking users to the product page when they tap on a swatch, is an acceptable choice that can be technically simpler to implement compared to interactive swatches.