Accounts & Self-Service is a unique aspect of the e-commerce user experience.

Unlike the 6 other e-commerce themes we’ve researched, Accounts & Self-Service is often not part of the “direct purchase funnel”.

However, this isn’t to indicate that Accounts and Self-Service UX is less important than other e-commerce themes.

Returning users — those most likely to use self-service features most often — are critically important to a successful e-commerce business, which means the Accounts & Self-Service UX performance can be just as important as the UX performance of the Product Page, Homepage & Category, or any other e-commerce areas when it comes to a site’s overall long-term sales.

For this analysis, we’ve summarized the 7,000+ UX performance scores for the 53 benchmarked sites that have been manually reviewed and scored by Baymard’s team of UX researchers (embedded below).

In this article we’ll analyze this dataset to provide you with the current state of e-commerce Accounts & Self-Service UX.

Each dot, therefore, represents the summarized UX score of one site across the 6–13 guidelines within that respective topic. The top row is the total Accounts & Self-Service UX performance.

The high-level benchmark results show that 88% of e-commerce sites have an overall “poor” to “mediocre” UX performance for their Accounts & Self Service implementation.

It’s highly likely, therefore, that the average end user of an e-commerce site’s Account & Self-Service features will experience many issues — with some being so severe as to cause the user to give up on using the site altogether.

Additionally, compared to the other themes of e-commerce UX, Accounts & Self-Service is the theme with by far the fewest “decent” or high-performing sites, and leans heavily towards “broken” and “poor” sites.

This indicates that most sites fail to align with user expectations postpurchase, and are not dedicating enough resources to accommodate users who are looking to manage their account details or modify their orders.

Moreover, it’s evident that Accounts & Self-Service is the theme within e-commerce that has the highest degree of completely uniquely designed and developed implementations, when it comes to bespoke “account concepts”, unique structure, navigation, and information architecture.

Again, this stands in sharp contrast to the other themes of e-commerce UX: our benchmarking of these other themes clearly reveals that almost all sites have chosen one of the 3–8 common “approaches” to their navigation/product pages/checkout when it comes to the overall concept, structure, and information architecture — approaches that have matured and evolved through the roughly two decades that e-commerce has existed (while allowing that most sites do have a unique look and feel for their category navigation, product details pages, or checkout flow, for example).

The lack of common implementation patterns may also help explain why Accounts & Self-Service UX underperforms other e-commerce themes by such a wide margin.

Below we’ll discuss 5 Accounts & Self-Service UX pitfalls to be aware of in 2 of the 5 benchmarked topics: the “Account” Drop-Down and “‘Your Account’: Addresses, Payments, & Newsletters”.

(If you’re brand-new to UX, consider reading What Is UX? before diving into the research.)

Our benchmark data reveals that 82% of Baymard’s benchmarked sites provide an “Account” drop-down.

Perhaps it’s due to its ubiquity that the “My Account” drop-down has become a crucial navigational anchor for users.

Users who are seeking to access their account information often go to the “Account” drop-down as a first step, whether they’re trying to track an order, initiate a return, update a payment method, add an address, or perform some other account task.

Yet the “Account” drop-down is the worst performing of all the benchmarked Accounts & Self-Service topics — only 13% of sites perform “decent” to “perfect” — indicating users are likely to immediately get off to a bad start when attempting to access and use account features.

In particular, there are 2 issues sites tend to get wrong when it comes to the “Account” drop-down.

1) Failing to Distinguish Primary from Secondary Paths (Only 20% Do)

“Right now I’m just trying to check out everything that’s listed under ‘Your Account’. Which is a myriad of options, actually…‘Your Account’, ‘Your Orders’, ‘Your Dash’…it’s sort of all over the place.”

During testing, some users were observed to get bogged down when facing a “wall of links” in the “Account” drop-down, while others simply felt overwhelmed. 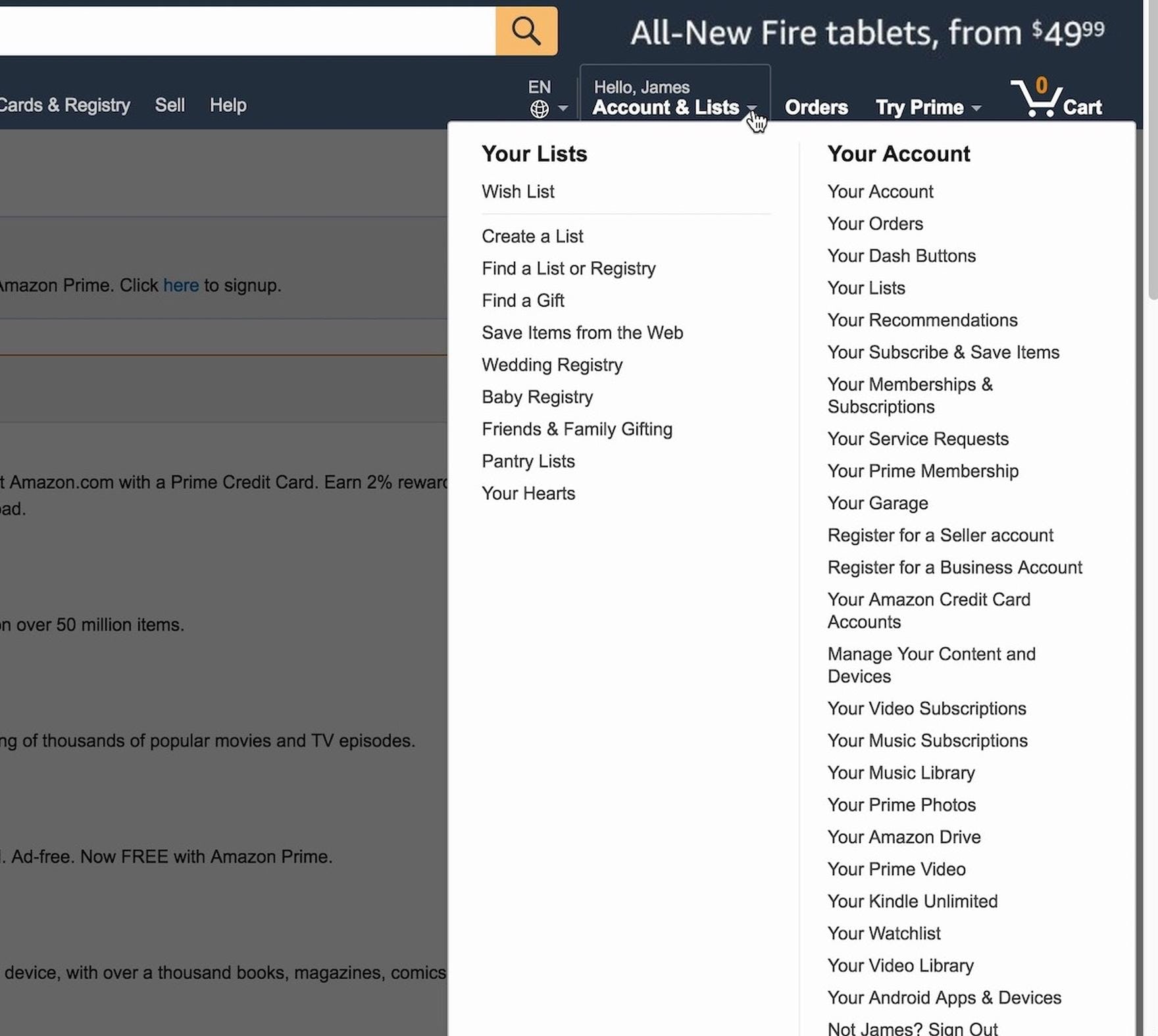 At Amazon, many users during testing had trouble navigating the “Account” drop-down due to the number of links included and the lack of structure in the “Your Account” column of the drop-down.

Users faced with no obvious organization or information hierarchy in a “My Account” drop-down will often become victims of choice paralysis — it’s not clear where to start to accomplish an account-management task — and will spend seconds or even minutes scanning the “Account” drop-down before choosing a path. 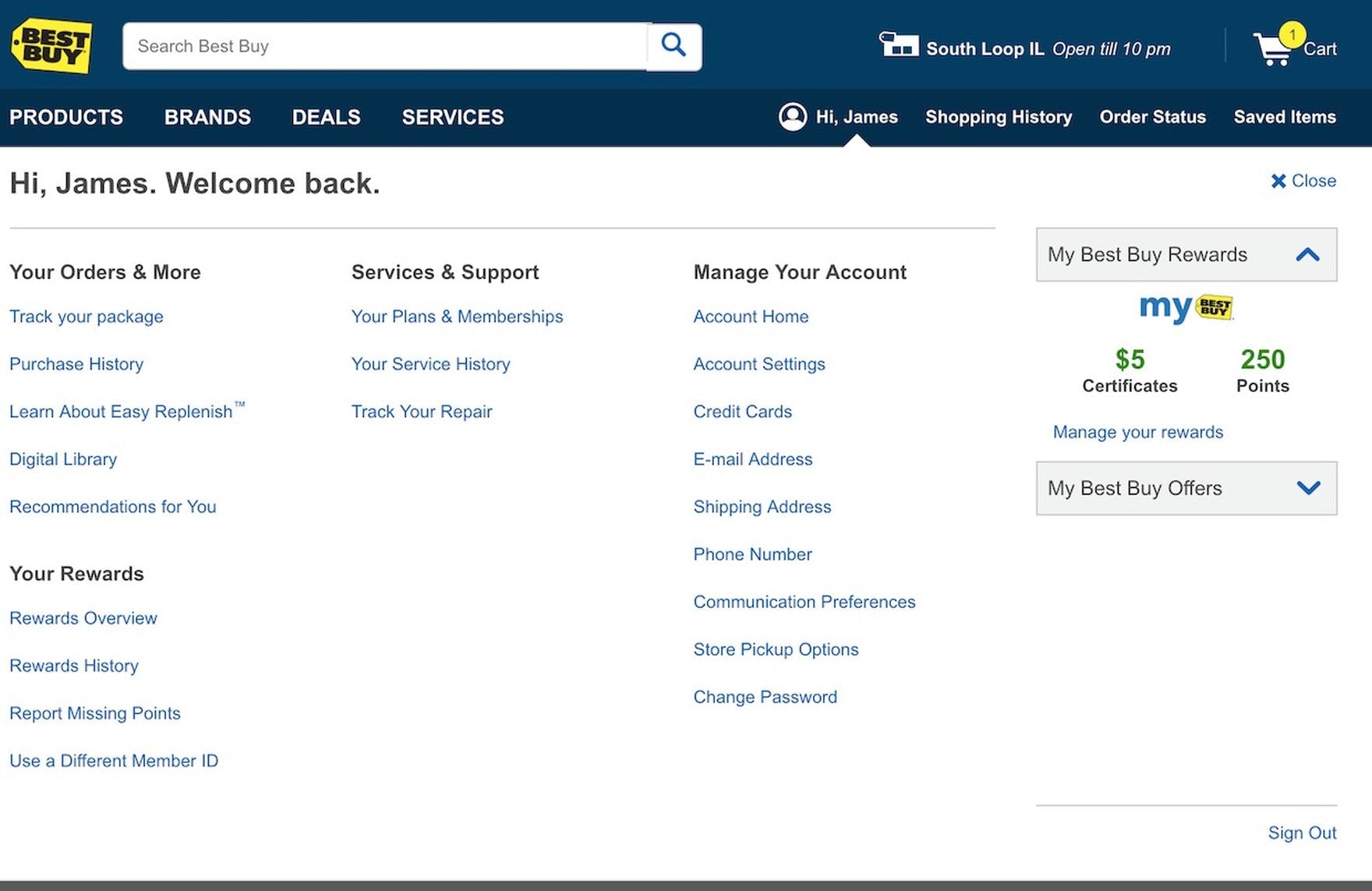 Testing revealed that some sites neglected to make good use of their “Account” drop-down menus by only including a few, highly general links; or, conversely, including many secondary account features, such as site credit card promotions or very specific features that only a subset of users would need (e.g., “Your Garage”).

This isn’t very helpful to users looking to accomplish specific tasks who, at a minimum, take longer to find the core account feature they’re looking for when it’s not in the “Account” drop-down.

More severely, some users end up on long-winded detours as they try to find the account feature they’re looking for (e.g., navigating to the cart or winding up in help sections when trying to find information on orders), with the end result being that they never complete the self-service task they were attempting. 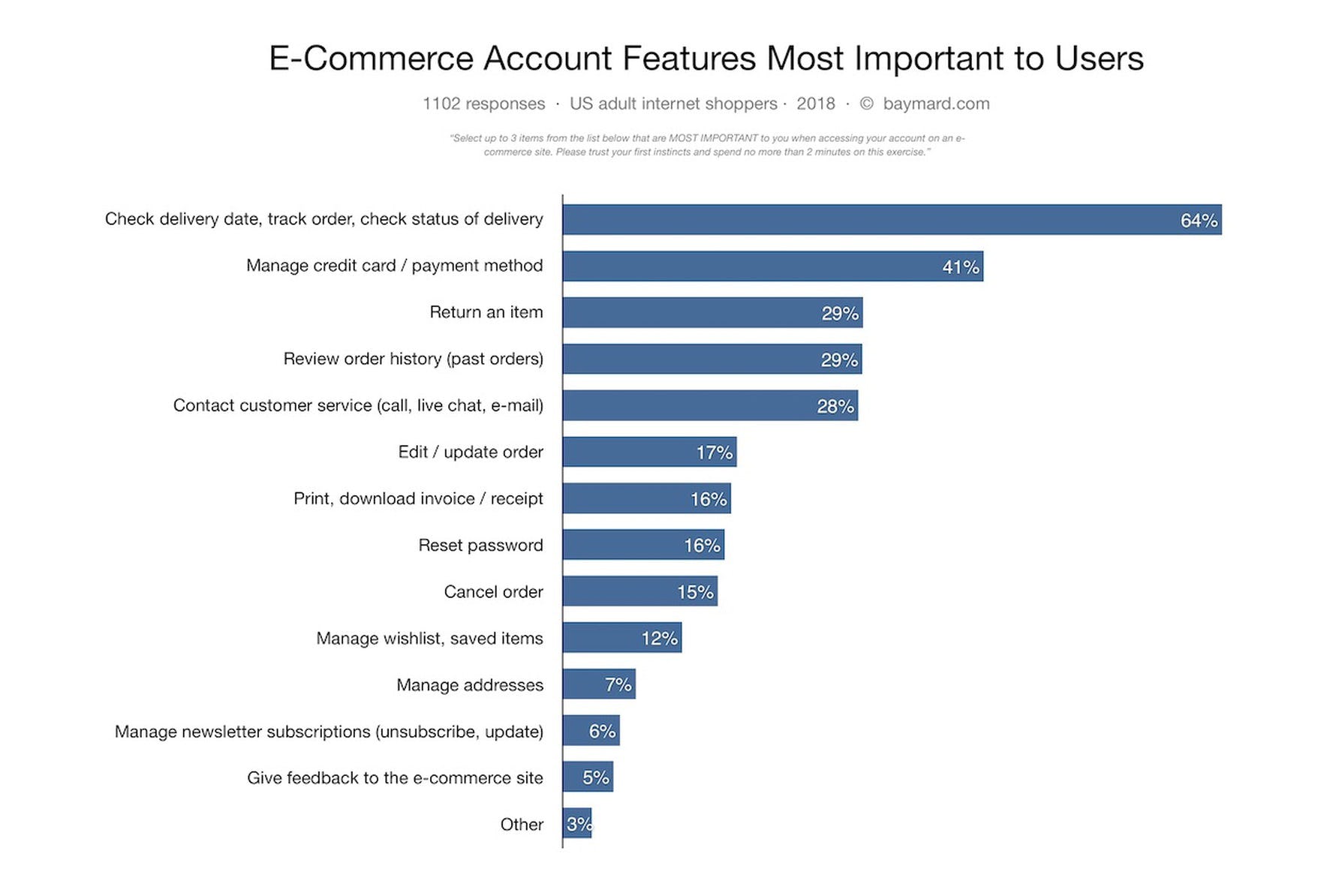 While the specific features to include will vary from site to site, results from our quantitative study indicate that the following features should be included in “Account” drop-down menus, as they’re the most heavily relied upon by users:

Depending on which features are available, the above can serve as a starting point when considering which features to provide access to from the “Account” drop-down.

Our benchmark shows that the “Your Account” area of Accounts & Self-Service UX is another poor performer — 69% of sites perform “poor” to “mediocre”.

While users may not access their accounts very often to manage their addresses or newsletters, managing addresses, along with payment methods, is a crucial feature that must work well for users to be able to place and manage orders and returns.

Any issues users have managing addresses or credit cards can be a direct cause of increases to the cart abandonment rate or could require extensive customer service resources to resolve.

In particular, there are 3 issues sites tend to get wrong when it comes to the “Your Account” area of Accounts & Self-Service.

While storing users’ credit cards can be a major convenience factor, users also need to update their stored credit cards from time to time. 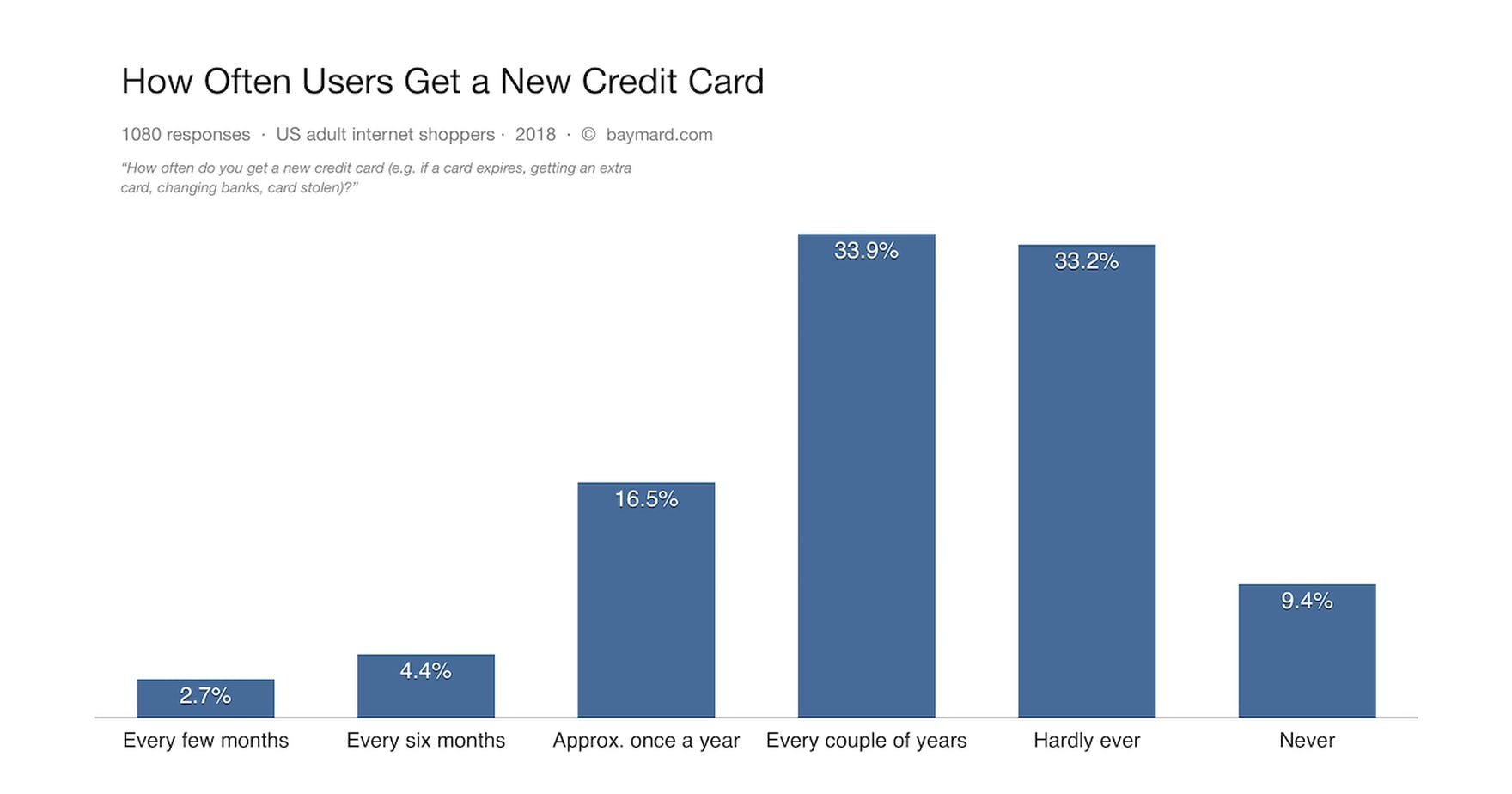 Results from our quantitative study on how often users get new credit cards.

In fact, our quantitative study reveals that 54.2% of users have their card stored at one or more e-commerce sites, but it also reveals that 23.6% of users get a new credit card at least once a year, and 57.5% at least every couple of years.

While many sites do offer this functionality, the process doesn’t always meet users’ expectations. 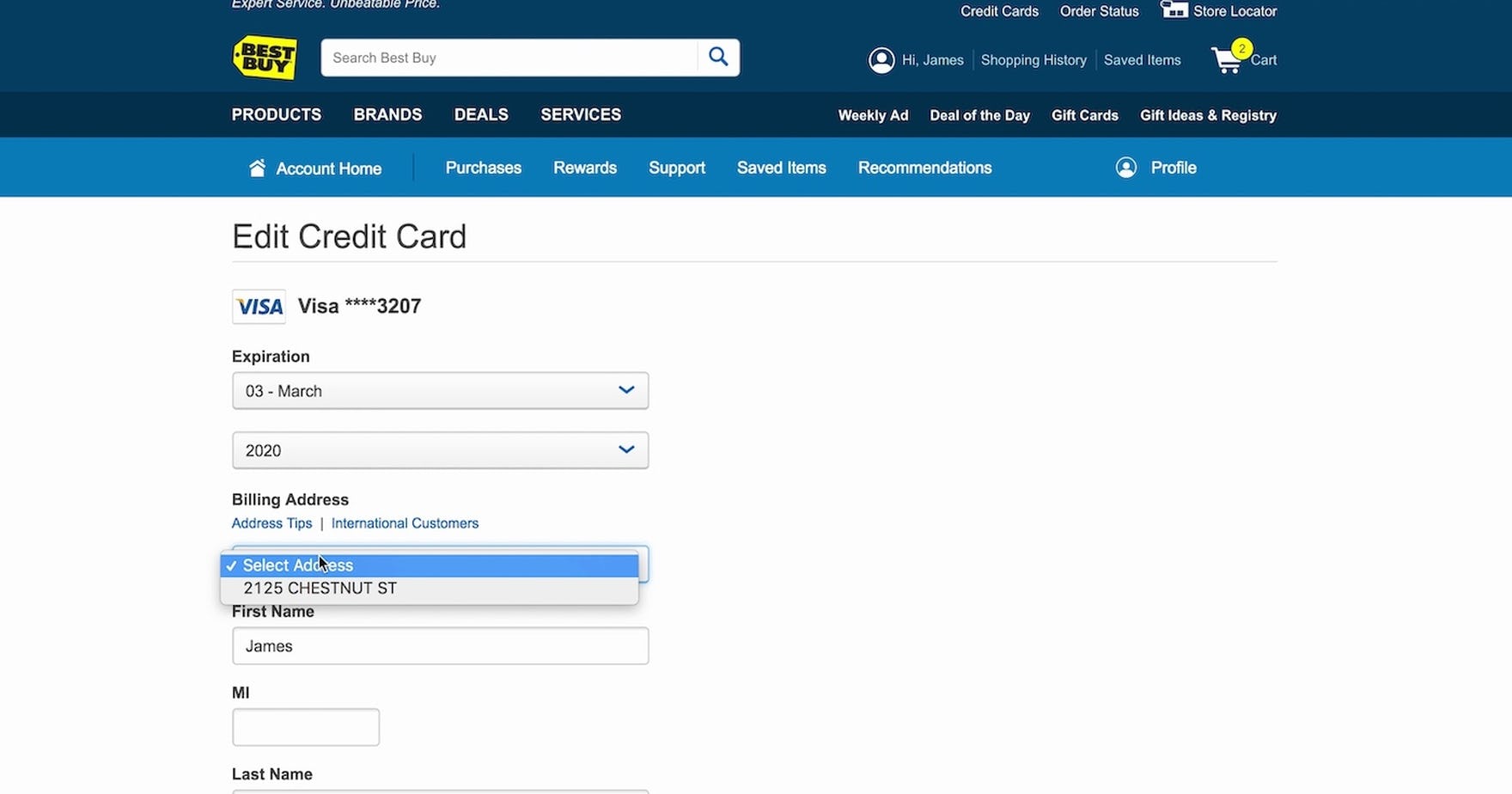 “Where is the number? Do I update it here? That doesn’t make sense.” When attempting to edit payment method details, many users struggled to understand that the interfaces would not allow them to edit their credit card number, like here at Best Buy.

In particular, many users will seek to “edit” their existing credit card number — users simply don’t know enough about PCI compliance and card regulations to understand why it’s not possible for the site to store, display, and allow them to edit this outdated card information. 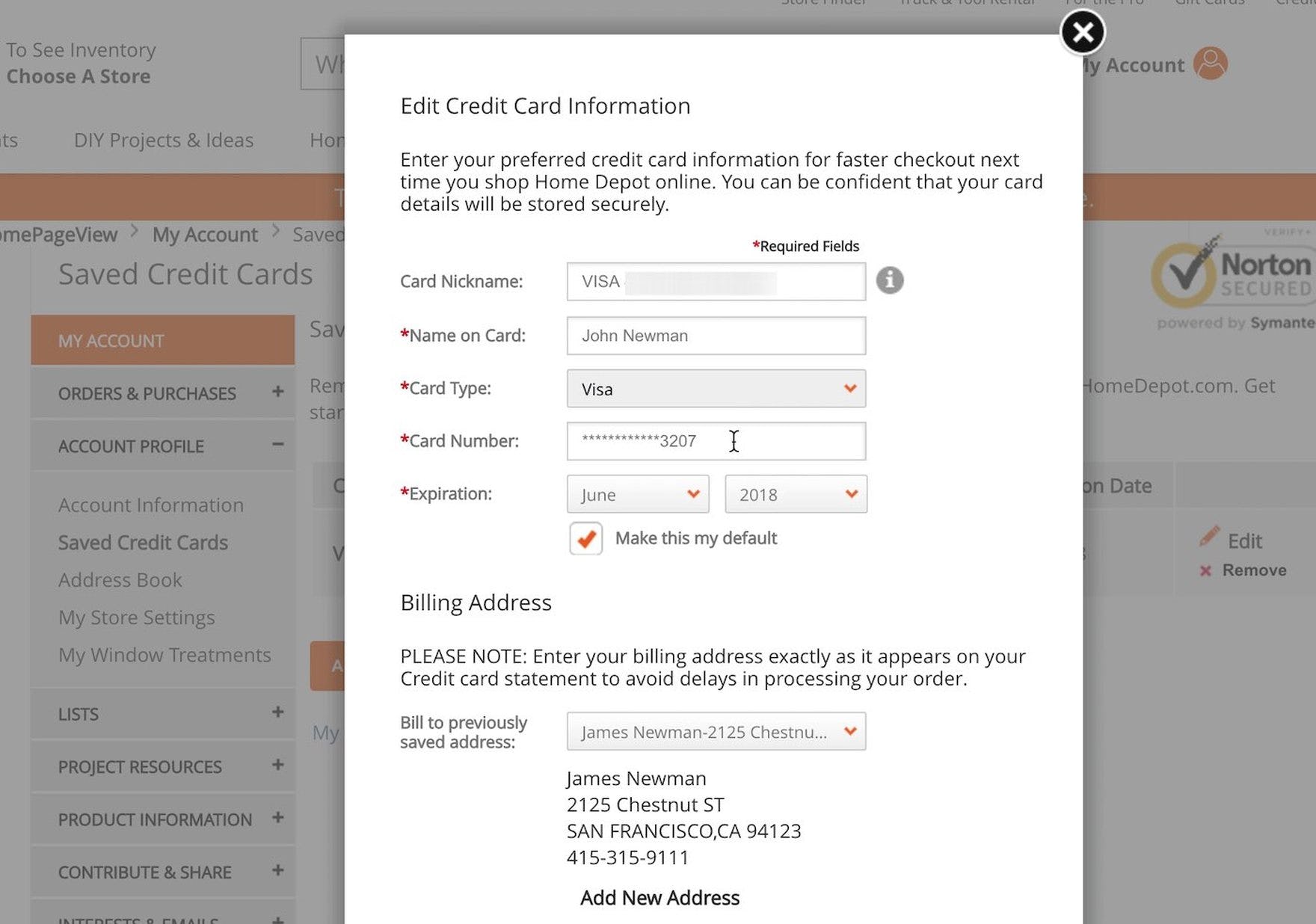 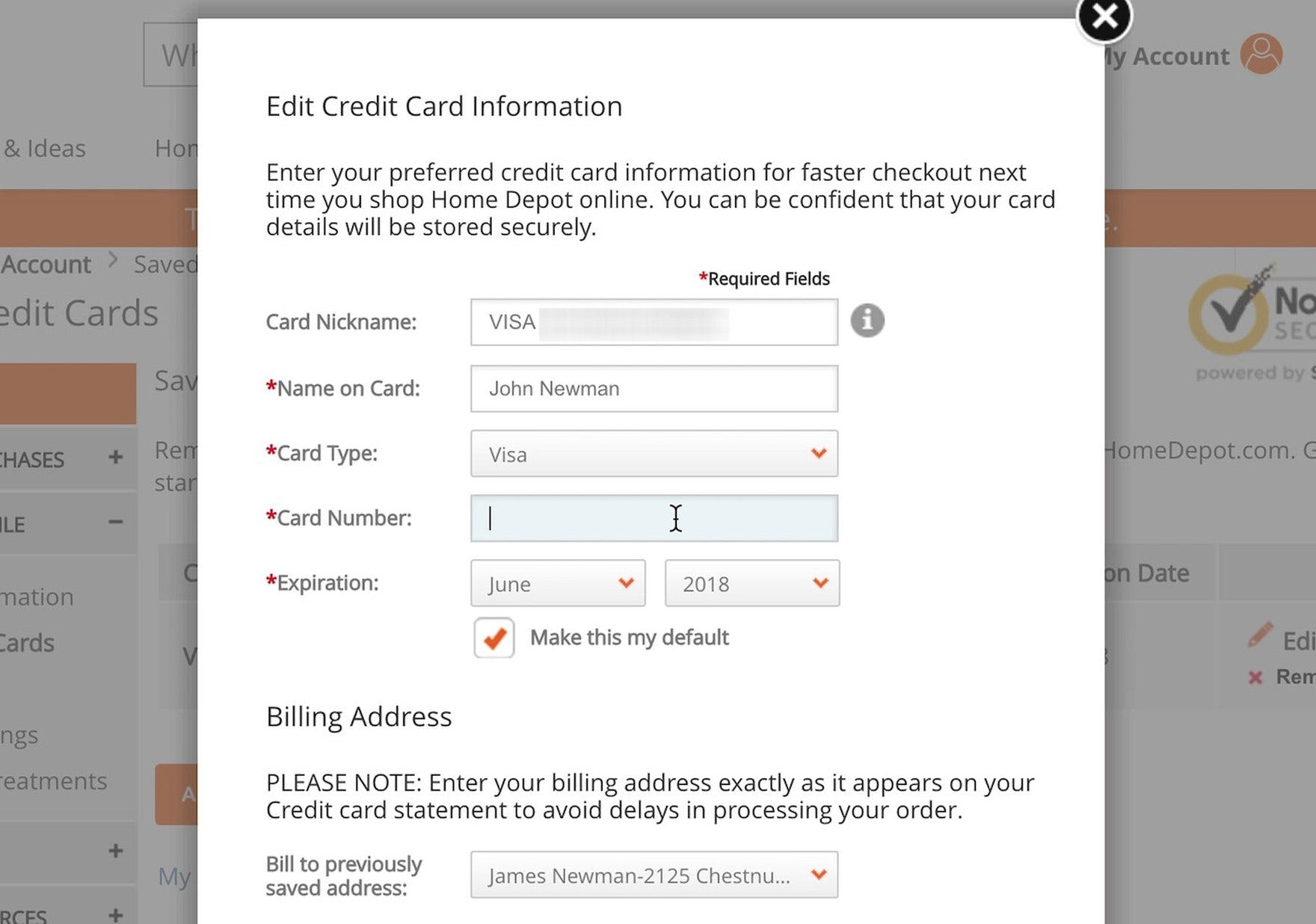 At Home Depot, the stored credit card interface provides what appears to be a one-step process for editing credit card data. In reality, the interface creates a fake editing feature by combining two processes — deleting an old card number and adding a new one — within a single “edit card” task. By default the old partially hidden card number is shown (first image). But as users click into the “Card Number” field the entire field is cleared, leaving users to type a new card number from scratch (second image).

Instead, allow users to “edit” their stored credit card information by creating an illusion of editing the card number.

A fundamental concept of usability is providing feedback on user actions.

When users aren’t provided with a visible confirmation that shows that the system has recognized their just-performed action, they often become unsure of whether the action was registered.

During Accounts & Self-Service testing, users time and again sought confirmation that the action they had just completed — whether it was changing an address, resetting a password, updating a payment method, or another change — had been successful.

“There’s nothing that says, ‘Your password’s been successfully changed.’…Did I miss it? I don’t think I missed it.” At Nordstrom, 33% of users weren’t confident their account changes were registered, as Nordstrom didn’t provide confirmation messages for some account changes. This increased the time it took for users to resolve tasks, as many decided to double-check by going to their email inbox.

When there’s no indication of success, some users lose confidence in their actions and the ability of the site to make changes they desire, and other users must spend more time “double-checking” that their change has been successful. 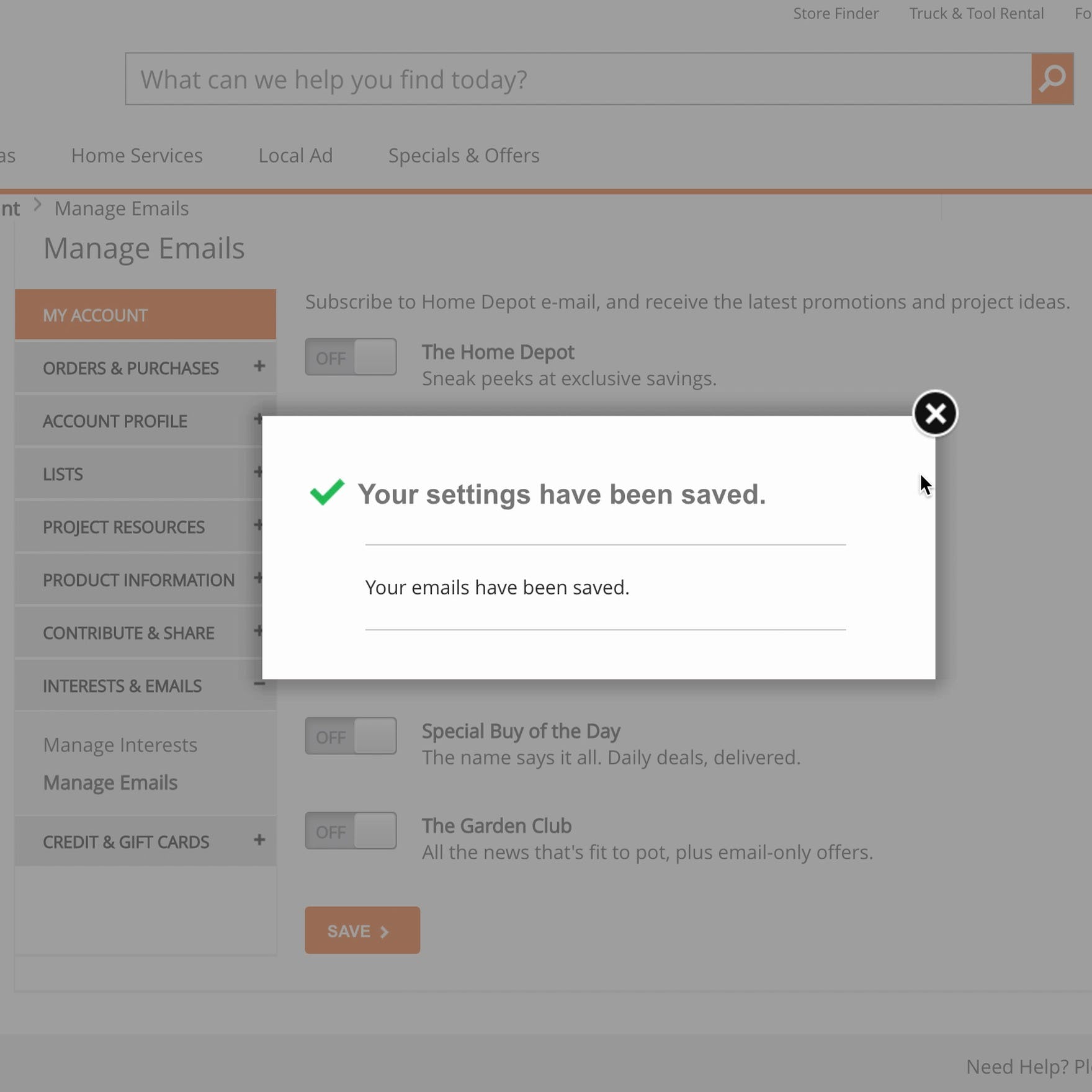 At Home Depot an overlay confirmation message has the benefit of focusing users’ attention, ensuring they know they’ve successfully completed their task. 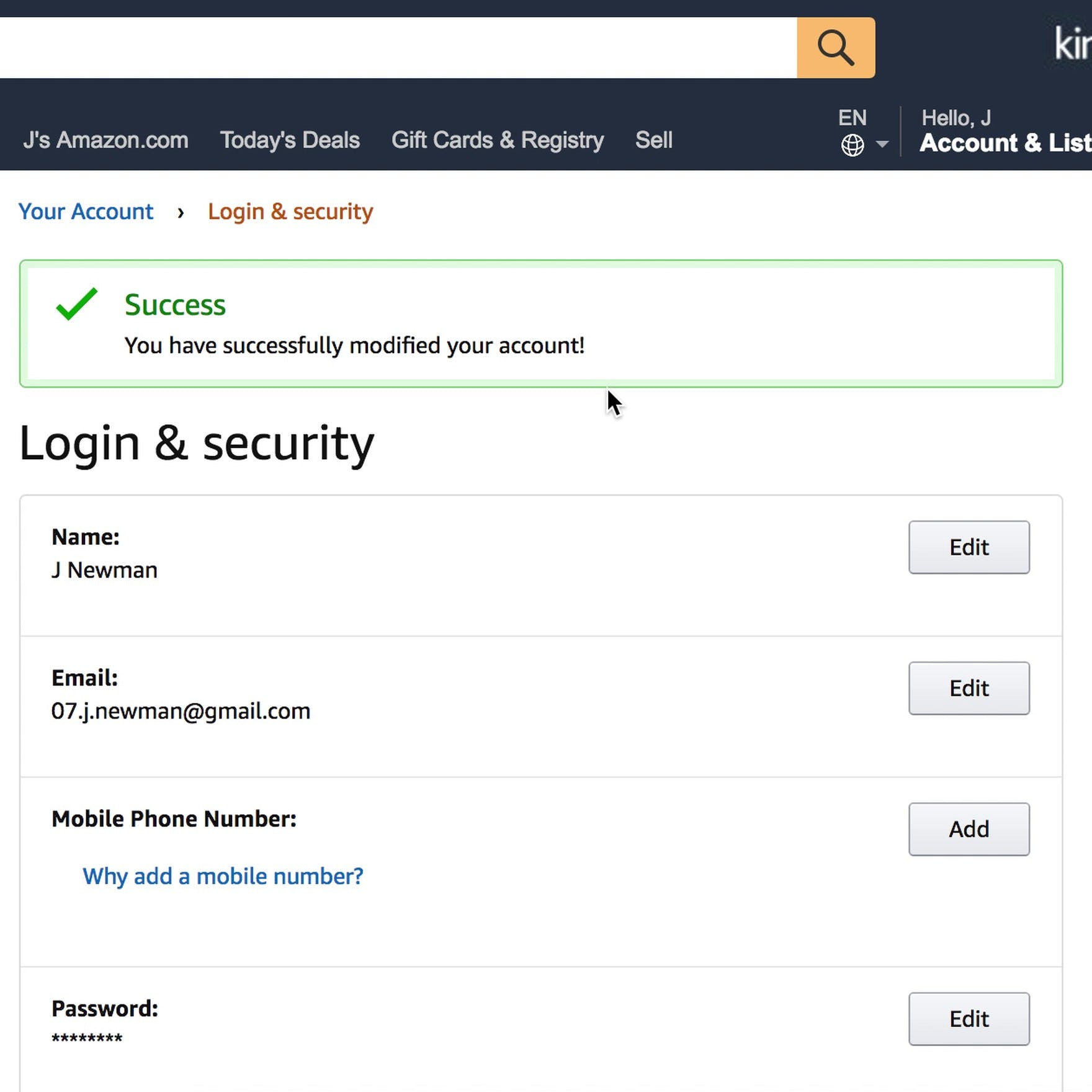 Therefore, it’s important to provide confirmation that users’ changes have been successful.

Notably, it’s important that, in addition to providing confirmation messages, the messages must also be highly visible and unambiguous to remove any uncertainty.

Newsletters are the primary means by which many e-commerce sites communicate regularly with customers. 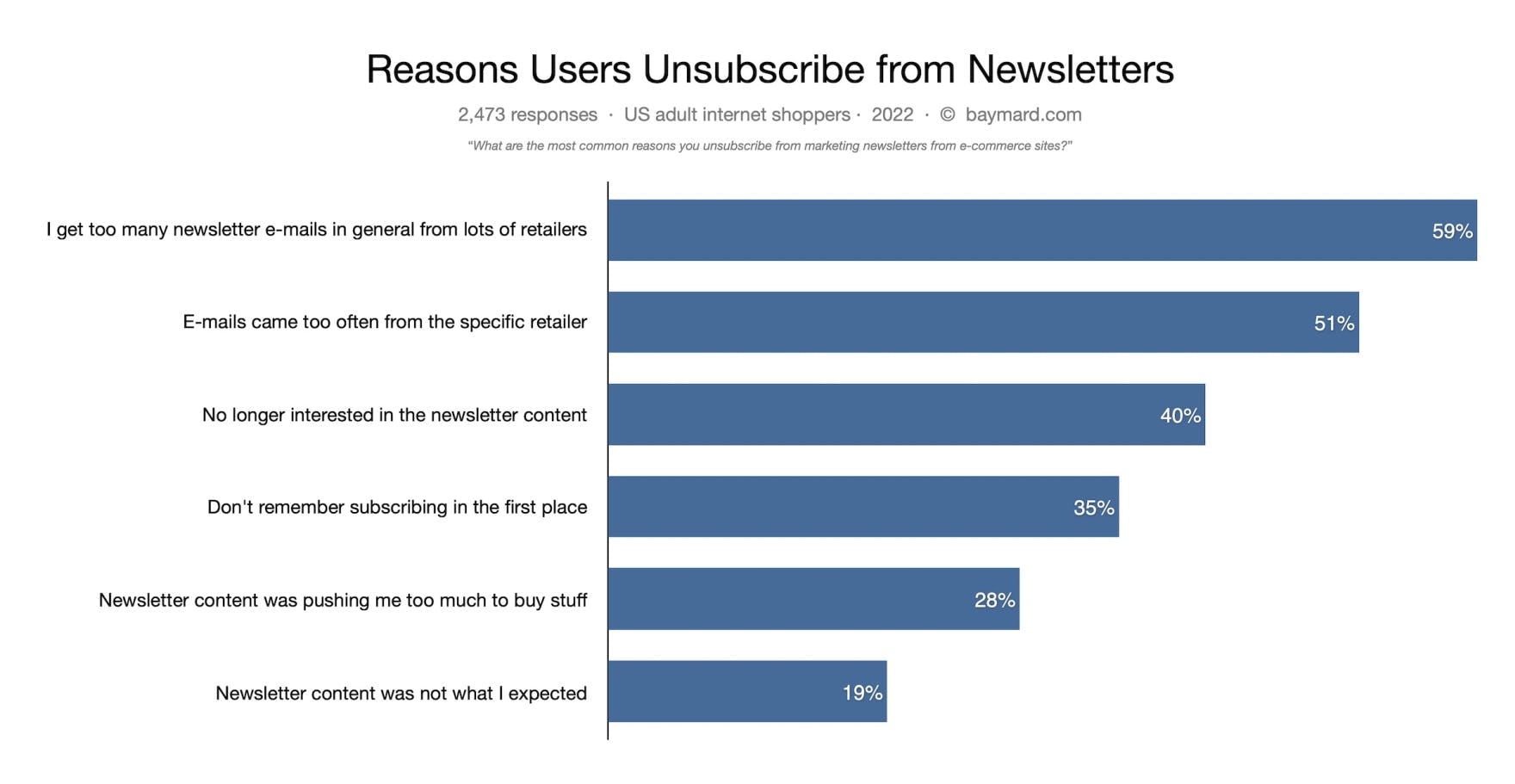 Our quantitative study asked users for their reasons for unsubscribing from newsletters. 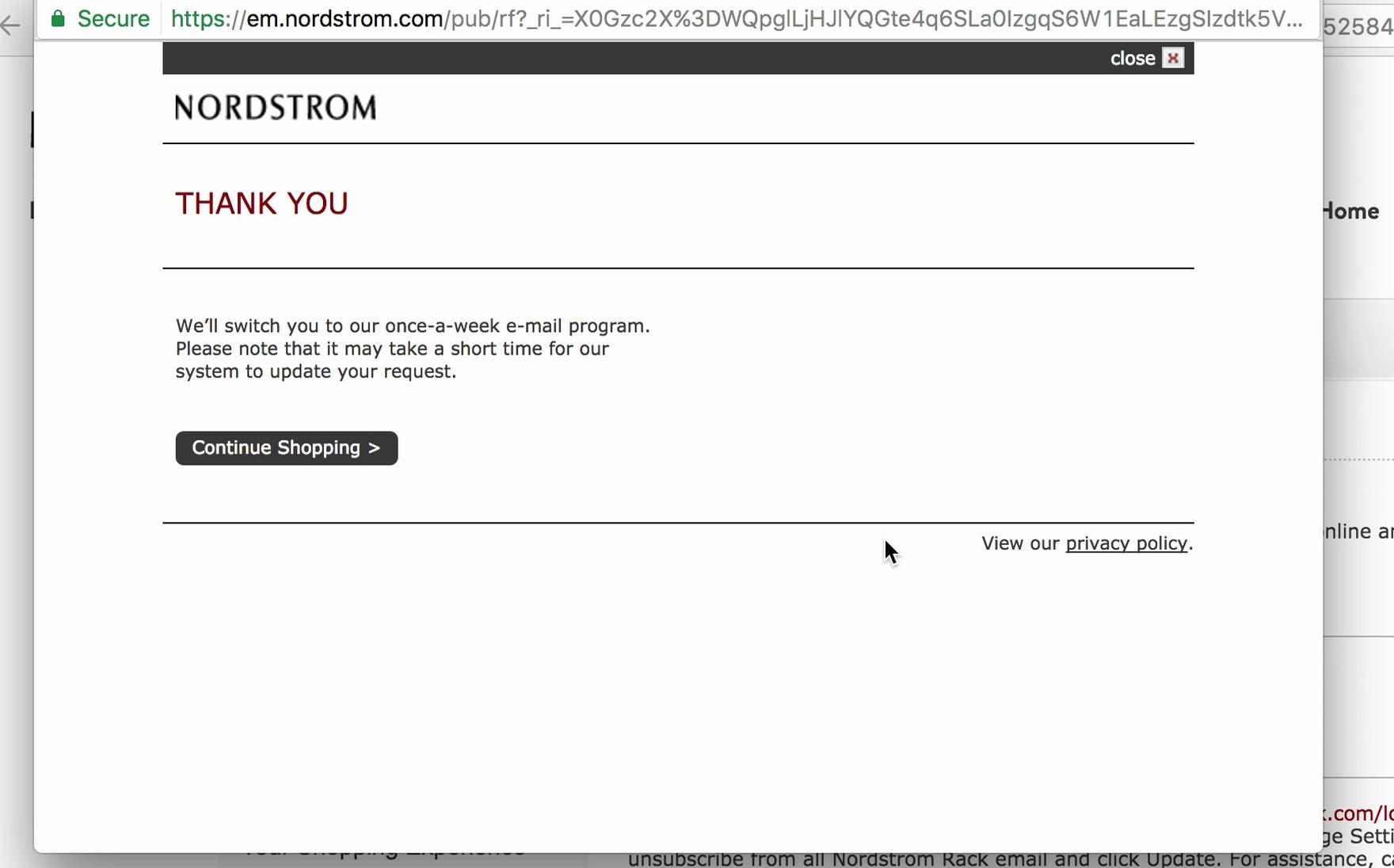 “Oh, so that’s once a week, that’s not what I necessarily…on this page I don’t see an option to go to one per month.” A user at Nordstrom complained about the frequency of emails he’d be getting, without a way to adjust it.

Additionally, 51% of respondents say they unsubscribe because they get too-many emails from a specific retailer.

Clearly, then, it’s important to allow users to adjust how often they receive newsletters — or risk having users unsubscribe completely from newsletter communications. 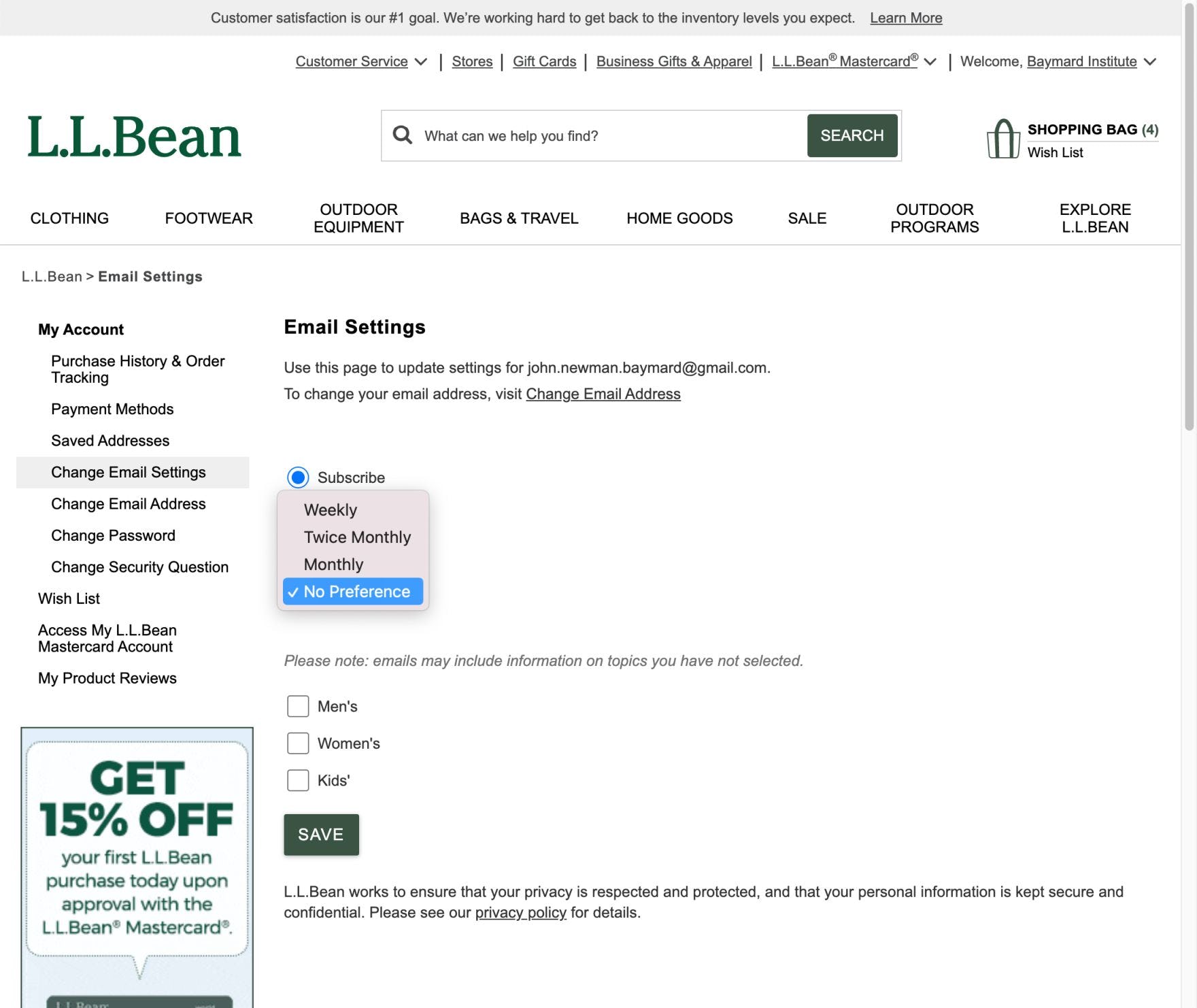 Users at L.L. Bean are provided with several options when it comes to newsletter frequency, ensuring users who are interested in receiving communications from the company — but not too many — have choices beyond “subscribe/unsubscribe”.

As users’ individual preferences vary, consider allowing them to choose from a range of frequencies, such as “twice a week”, “weekly”, “every second week”, or “monthly”, so users can find a frequency that keeps them engaged without becoming overwhelming.

For inspiration on “perfect” “Your Account” implementations, see Wayfair and L.L. Bean.

Avoiding the 5 pitfalls discussed in the article should be among the first steps toward improving users’ Accounts & Self-Service experience:

The 5 other topics should be reviewed as well to gain a comprehensive understanding of Accounts & Self-Service UX, as well as to identify other site-specific issues not covered here.

For inspiration on other sites’ implementations and to see how they perform UX-wise, head to the publicly available part of the e-commerce UX benchmark. Here you can browse the Accounts & Self-Service implementations of all 53 benchmarked sites.